Skip to content
Home / “Demographics in mainstream economics has been under-emphasized for too long” – Andy Haldane, Chief Economist, Bank of England 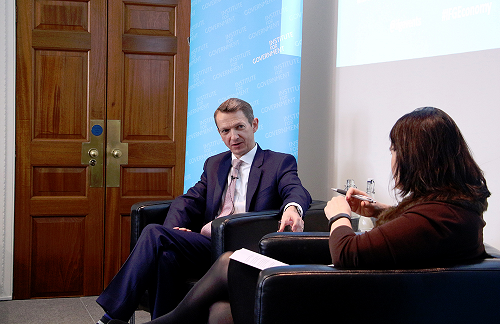 “Will economists start to consider demographics when making their forecasts and developing government policies?”

This was the question on my mind at a recent discussion on the topic of “An economy that works for everyone” at the UK’s Institute for Government.  The speaker was the Chief Economist of the Bank of England, Andy Haldane, and the Institute’s Director, Bronwen Maddox kindly invited me to ask my question as part of the discussion.  You can watch the Q&A by clicking here.  The transcript is below.

Critically, Haldane acknowledges that economists need to rethink their approach.  Until now, they have focused on developing policies that impact “the average person”.  Instead, he agrees that they now “need to be super-granular, household by household”, in terms of demographics and other relevant detail.

Andy Haldane is a leading central banker.  His statement that “we shouldn’t have fixed views on how monetary policy works” is therefore very important.  New ideas are urgently needed, and his comment opens the door for debate.    As I have discussed here in earlier posts (Policymakers’ out-of-date economic models fail to create growth, again, Age range and income level key to future corporate profits), I believe there is an urgent need to develop an alternative economic model based on the ”competing populations” concept developed by the biologists.

Paul Hodges
“Andy. Thank you very much indeed for the stimulating talk. You made a comment just now about “is it something else” (that is causing the post-2008 recovery to be so slow and uncertain), and at the start you talked about the need perhaps to reinvent or rethink economics. You also made a point about the failure of conventional economics to explain this difference between the frontier companies (who are leading in their fields) and the others.

Just before Christmas the bank put out a survey of spending with relation to interest rates and monetary policy which suggested that again and I quote almost exactly “conventional economics would have said that if you pass on lower interest rates, people will spend more. “But in fact only 10% of people did. So what I wanted to ask you was,

“Is this something else” to do with really significant demographic changes in the economy – that we now have a group of BabyBoomers, the largest-ever group of people in the population, who are refusing to die at 65 as they would have done in the past. In fact they are living now for another 20 years, and we have around one in five of the population in that age group.”

My question really is therefore “do you think that investigating this demographic impact, which has never happened before in the world, could be useful”? Because I think that it might provide the key (a) to the new type of economics and also (b) to the question of how we raise UK productivity.

Andy Haldane
“Paul, your work on this is a very good example of how demographics in mainstream economics has been under-emphasized for too long.

That I think is changing by the way – that I think is changing and we are seeing for example when people tell the story that I mentioned earlier on about secular stagnation – the kind of Bob Gordon, Larry Summers-type hypothesis – one of the facts that is pointed towards would be demographic factors nudging us in that direction.

When we’re trying to make sense of why it is that interest rates globally – not ones set by central banks, ones set by financial markets – why they are so low, for as far as the eye can see, part of the explanation, I think, lies in evolving demographics and the implications that has about saving and for investment.

The study you mention, I think of households, which we conduct a regular basis to try and understand their patterns of spending and saving is, in some ways, a brief example of all we discussed today. It’s a vertical distribution. It’s saying we can’t take the average person, the so-called representative agent and hope that by studying them we can make sense of what’s going on. We need to be super-granular, household by household:

It could be the case we reach the point where interest rates are a bit less potent in stimulating spending than was the case in the past. We shouldn’t have fixed views or fixed multipliers about how monetary policy works.

It can change as the economy can change and by looking at this more granular data, like Michael Fish* did after 1987, we can perhaps tomorrow, or failing that the day after tomorrow, do a somewhat better job of making sense of what happens next in the economy.”

* Michael Fish was the BBC weather forecaster who famously denied on-air in October 1987 that a hurricane was about to hit the UK. Haldane had earlier noted that this failure had prompted a complete rethink of weather forecasting, which was now much better as a result. He hoped that economists’ failure to forecast the 2008 Crisis might end up causing a similar process of rethinking and reinvention to take place.