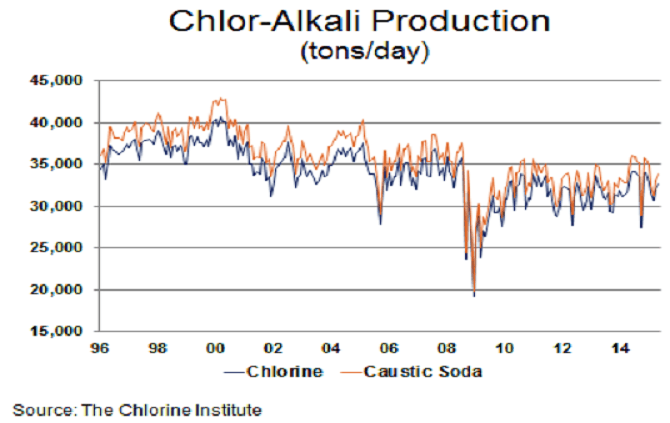 Its not all fun being part of the US millennial generation (those born between 1980 – 2000).  They number 80 million, about the same as the BabyBoomer generation.  But as the New York Times notes:

In addition, the millennials are much more racially mixed than the older generation as Census Bureau data shows for the 15-34 age group.

This increase in racial diversity matters in terms of employment, and hence spending power. Bureau of Labor Statistics data shows that in Q1, only 3% of Asians and 5% of Whites were unemployed in the 25 – 34 age group, compared to 7% of Hispanics and 12% of Blacks.  Equally important is that median earnings for Blacks are around 20% less than for Whites/Asians, and 25% less for Hispanics.

Importantly also, in terms of potential housing demand, nearly a third of all 18-34 year olds were still living with parents in 2014, up from just over a quarter in mid-2000.

DEMOGRAPHIC CHANGE HAS ECONOMIC IMPACT
These changes matter in terms of demand for basic chemical products, as the chart above of chlorine and caustic soda production from the American Chemistry Council (ACC) confirms.

The problem is that the higher-spending Boomer generation has been followed by lower-spending Millennials.

Volumes for both chlorine and caustic soda have thus drifted steadily lower over the past 20 years.  Current volumes are actually lower than the lowest levels seen before 2008.  And chlorine demand into PVC has been badly hit by the collapse of housing starts which are now less than half the peak levels seen in the early 2000s.

This has not been good news for producers, who had assumed there would be a major recovery in the US economy.  They have also been disappointed by demand in export markets, as latest data from Global Trade Information Services shows:

The second chart, based on Chlorine Institute data confirms the result of these trends in terms of capacity utilisation.  Rates so far in 2015 have been in steady decline with 2015 averaging just 81% versus 83% in 2014 and 86% in 2013.

Thus developments in the chloralkali industry highlight the critical importance of focusing on demand-related issues, rather than assuming that lower feedstock costs will automatically lead to success.