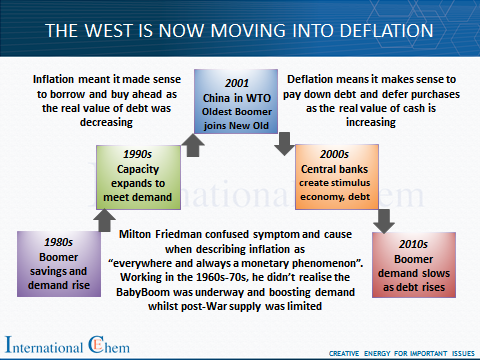 The last in the blog’s series on things that we think we know, but may not, looks at the prospects for inflation.  A new survey this week of the world’s wealthiest individuals summed up the consensus view:

“If there are two factors that make the rich stand out, on this survey, it is their fear of inflation and their faith in London and its property market“.

The same is true of most investors, who believe that the central banks’ liquidity programmes are bound to lead to inflation, if not hyper-inflation.  In turn, this influences many company boards, who believe that pricing power is bound to return, and so enable new investments to become vastly profitable.

The blog will discuss this Recovery Scenario in more detail on Monday.  It may, of course, finally turn out to be correct as the wealthy didn’t get that way by making too many mistakes, after all.  But there is another potential outcome, the Demographic Scenario described in the above slide:

It is therefore obvious with hindsight that inflation was inevitable, as all these new babies grew up and created demand.  The post-War economy was in no position to supply this demand, with many countries having been bombed literally to bits.  And there was also only the small inter-War population to provide it.

The solution, of course, came as the Boomers entered their wealth creation period between the ages of 25-54, from 1983 onwards.  They joined the workforce and increased supply, whilst they were also able to save money that could be used to fund new investments.

This model worked brilliantly, such that after the fall of the Berlin Wall in 1989, Boomer savings went to create new factories and supply in Eastern Europe, and then in Asia.  They funded the construction needed, and then bought the products produced.  But there was always more demand than supply, so there was always inflation.

But after 2001, this dynamic went into reverse.  The oldest Boomer turned 55, and entered the New Old generation where people need to buy less and have to save more to fund their retirement.  And at this precise moment, China joined the World Trade Organisation with a target of becoming the manufacturing capital of the world.

The outcome was obvious, as supply was now increasing whilst demand growth was slowing.

And in case of doubt, there was the example of Japan – whose BabyBoom had occurred 20 years earlier.  Its economy went into negative growth from 1990 and deflation became a permanent feature of the landscape.  This was helped by one specific feature of the previous boom, the credit cycle:

Central bankers recognised this issue, but were blinded by Friedman’s monetarist theory.  Thus US Federal Reserve Chairman Ben Bernanke gave a famous speech in 2002 titled ’Deflation: Making Sure ‘It’ Doesn’t Happen Here’.  It since became the playbook for his policies once the Financial Crisis began.

But of course he was wrong.  Unlike Friedman, he should and could have realised that the demographic balance was shifting in the direction of excess supply and deflation.  After all, president Bill Clinton was very clear about what was happening in his 1998 State of the Union address, when he announced the US was about to see its first balanced budget for 30 years:

“It is projected that we’ll then have a sizable surplus in the years that immediately follow.  What should we do with this projected surplus?  I have a simple, four-word answer:  Save Social Security first.   Tonight I propose that we reserve 100% of the surplus, that’s every penny of any surplus, until we have taken all the necessary measures to strengthen the Social Security system for the 21st century.  Let us say — let us say to all Americans watching tonight — whether you’re 70 or 50 or whether you just started paying into the system — Social Security will be there when you need it.”

Sadly, this didn’t happen.  Instead, policymakers remained convinced by Friedman’s argument that monetary policy was all that mattered.  And this is what they have continued to believe for the past 5 years, even though there is clear evidence that it has not reversed the economic slowdown.

2014 will likely be their last chance to prove their argument.  And of course they may be right, that their Recovery Scenario may finally be about to come true.  But if they are wrong, then all their stimulus efforts – from the sub-prime housing boom to today’s quantitative easing – will have done the exact opposite of what was needed.

In the Demographic Scenario the value of all this debt will increase due to deflation, and not be inflated away.  In turn, this will further reduce spending until finally the debt is cancelled – either by cutting spending and increasing taxes, or by default.   Then we will find, too late, that as famous economist John Maynard Keynes wrote:

“The ideas of economists and political philosophers, both when they are right and when they are wrong, are more powerful than is commonly understood. Indeed the world is ruled by little else. Practical men, who believe themselves to be quite exempt from any intellectual influence, are usually the slaves of some defunct economist.”

It is unfair to blame Friedman for this mistake. But historians will probably not be kind to those later policymakers who wrongly chose to ignore the demographic arguments at a crucial moment for the global economy.