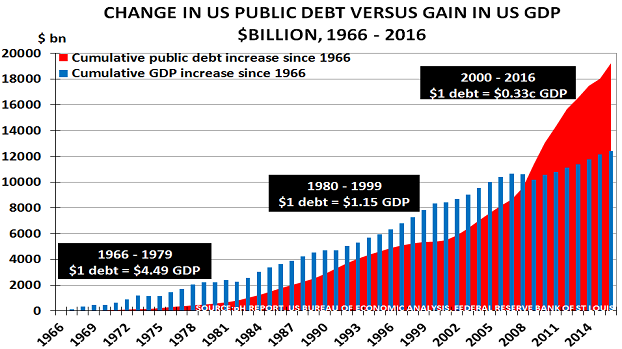 “The U.S. economy turned in the weakest performance in three years in the January-March quarter as consumers sharply slowed their spending. The result fell far short of President Donald Trump’s ambitious growth targets and underscores the challenges of accelerating economic expansion.”

And as the Wall Street Journal (WSJ) added:

“The worrisome thing about the GDP report is where the weakness was. Consumer spending grew at just a 0.3% annual rate—its slowest showing since the fourth quarter of 2009… As confirmed by soft monthly retail sales and the drop off in car sales, the first-quarter spending slowdown was real“.

The problem is simple.  Economic policy since 2000 under both Democrat and Republican Presidents has been dominated by wishful thinking, as I discussed in my Financial Times letter last week.

The good news is that there are now signs this wishful thinking is finally starting to be questioned.  As the WSJ reported Friday, BlackRock CEO Larry Fink, who runs the world’s largest asset manager, told investors:

“Part of the challenge the U.S. faces, Mr. Fink said, is demographics. Baby boomers, the largest living generation in the country are aging, reaching retirement age.  “With our demographics it seems pretty improbable to see sustainable 3% growth.””

And earlier this year, the chief economist at the Bank of England, Andy Haldane, suggested that the importance of:

“Demographics in mainstream economics has been under-emphasized for too long.”

Policymakers should have focused on demographics after 2001, as the oldest Boomers (born in 1946) began to join the low-spending, low-earning New Old 55+ generation.  The budget surplus created during the SuperCycle should have been saved to fund future needs such as Social Security costs.

But instead, President George W Bush and the Federal Reserve wasted the surplus on futile stimulus policies based on tax cuts and low interest rates.  And when this wishful thinking led to the 2008 financial crisis, President Obama and the Fed doubled down with even lower interest rates and $4tn of money-printing via quantitative easing.

This wishful thinking has therefore created a debt burden on top of the demographic deficit, as the chart confirms:

Each $1 of new debt has therefore only created $0.33c of GDP growth – value destruction on a massive scale

It is therefore vital that President Trump learns from the mistakes of Presidents Bush and Obama.  Further stimulus policies such as tax cuts will only make today’s position worse in terms of debt and growth.  Instead, he needs to develop new policies that focus on the challenges created by today’s ageing population. as I suggested last August:

“3 key issues will therefore confront the next President. He or she:

□  Will have to design measures to support older Boomers to stay in the workforce
□  Must reverse the decline that has taken place in corporate funding for pensions
□  Must also tackle looming deficits in Social Security and Medicare, as benefits will otherwise be cut by 29% in 2030

It has always been obvious that the Fed could not possibly control the economic fortunes of 321m Americans. Common sense tells us that demographics, not monetary policy, drive demand. Unfortunately, vast amounts of time and money have been wasted as a result. The path back to fiscal sanity will be very hard indeed.”