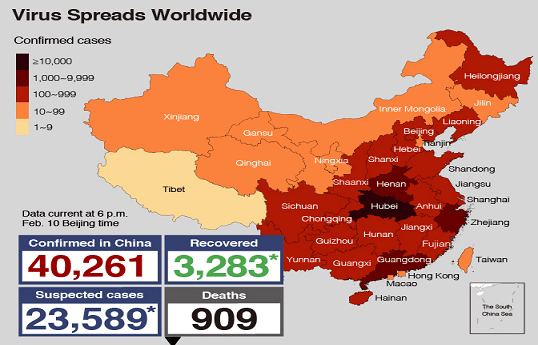 Last month, our Hong Kong-based pH Report colleague, Daniël de Blocq van Scheltinga, warned of the “Possible development (epidemic?) of the Wuhan SARS like illness, and economic impact?”  His current view of developments, and their likely impact, is as follows:

Hubei, the epicentre of the corona virus epidemic, is a province in central China, where the famous Three Gorges Dam is located. It has a 59m population (around the same as the UK) and is known as the birthplace of modern industry in China. Today, it is the most important industrial manufacturing province in the country.

Wuhan is the capital, with 11m population. Its central location means it is also the largest comprehensive transport and logistics hub in China, with rail and road connections to all surrounding provinces.  430 high speed trains arrive in Wuhan every day, the airport has 3m passengers a month, and the port on the Yangtze River handles a large part of the 3bn tonnes of cargo that passes down the river each year.

Hubei’s GDP is $595bn, equal to Poland and Taiwan. Automotive, chemicals, steel, textile and machinery are all major local industries. Honda, Nissan, PSA, Renault, Dongfeng all have their most important production facilities in Hubei, as do companies such as Siemens, GE, Corning, Beiersdorf, and more recently Xiaomi. Their supply chains include thousands of Chinese companies – who are often supplying both domestic and international markets.

Financial markets are ignoring the economic impact for the moment. But they will wake up with a bump very soon:

The IMF had again reduced its global growth forecasts last month, before the corona virus epidemic.  China is over 15% of global GDP and has been central to global GDP growth since 2008. No other country can replace it. As the Wall Street Journal warned:

“The world is now more dependent than ever on China for key goods and services, increasing the virus’s impact on the global economy.”

The US trade war had already weakened its economy. The corona virus impact will take growth well below the forecast 6% in H1. The virus also presents a political challenge to President Xi Jinping, which could lead to a scaling back of his reform programme.

Overall, therefore, it is clear that the economic impact will be severe, both inside China and across the outside world.

At best, therefore, companies and investors should develop their contingency plans on the basis that China will effectively be out of the global economy till the end of Q1, and that the total impact will not be fully unwound until the middle of Q2.  And they should recognise that this relatively optimistic outlook depends on the assumption that warm weather from April/May will effectively kill off the virus, as it did with SARS in 2003.

As Daniel advises, “Fasten your seatbelts!”