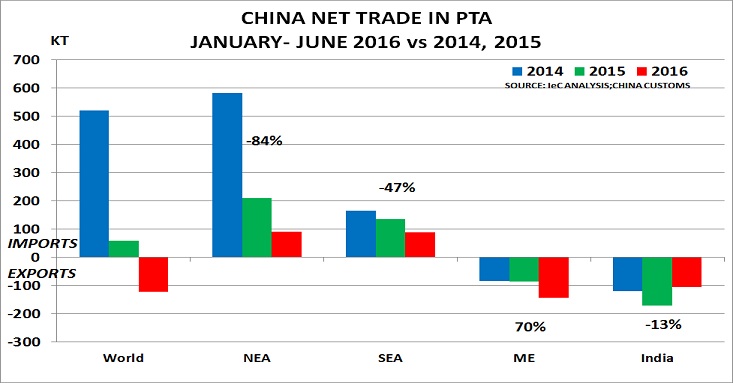 China used to be the world’s largest importer of PTA (the raw material for polyester). But not any more. Instead it has become a net exporter for the first time in history:

□  Its imports ramped up from 400kt in 1995 to 7 million tonnes in 2006, as Western textile manufacturing moved East
□  They remained around that level until 2012, when China began to install major new PTA capacity
□  It now has sufficient capacity to supply the entire world’s demand, and its imports have stopped
□  Instead, as the chart shows, it exported a net 120kt in H1, and no doubt volume will rise further in H2
□  NE and SE Asia have been the big losers, with their volume down 84% and 47% respectively

But as with polypropylene, these plants haven’t shut down.  They have instead increased their exports to other markets, primarily in Europe, where Korean volume has more than doubled from 200kt in 2014  to 500kt this year. Thailand has also nearly doubled ts exports to the Middle East from 70kt to 120kt over the same period.

Naturally enough, domestic European producers are feeling the pain, and have filed an anti-dumping suit against Korean producers with the European Commission.  Meanwhile, India has this month announced anti-dumping duties on a wide range of importers from China, Taiwan, Iran and Malaysia, whilst Mitsubishi Chemical plans to divest its PTA plants in China and India due to the “oversupply of material in the 2 markets”. 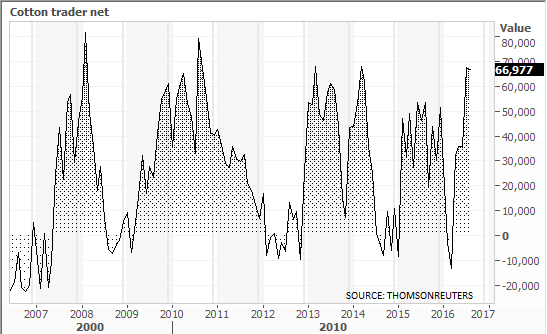 The pain could well get worse in H2, due to developments in cotton markets.  These had been expected to see lower prices from April, as China finally launched its long-awaited auction process to reduce its vast cotton stocks.  But the auctions had a very slow start, with latest USDA estimates suggesting China still holds 13 million tonnes of stock, down only 1MT since March.

This failure forced some consumers to go back into spot markets to cover their needs, where they were joined by a large number of hedge funds, who saw the opportunity for a quick profit. As the chart shows of US futures positions, their net long position soon reached near-record levels.

But now prices are falling again, after their near-50% rise.  They have already fallen 14% in the past 2 weeks, and could well retest their lows under 60c/lb:

□  China has just announced an extension to the planned auction period, suggesting it is serious about reducing inventory levels despite ongoing resistances from key producers
□  In addition, improved rainfall has prompted USDA to increase its volume estimate for the current crop in Texas and Louisiana – the main growing areas.

Hedge funds are not long-term investors.  And it seems likely they will now take their profits and exit the market, leaving producers and consumers to pick up the pieces.  At the same time, oil prices are also now weakening again, after their “silly season” August rally.

It could be tough times for cotton and polyester markets, as attention returns to today’s record surpluses.