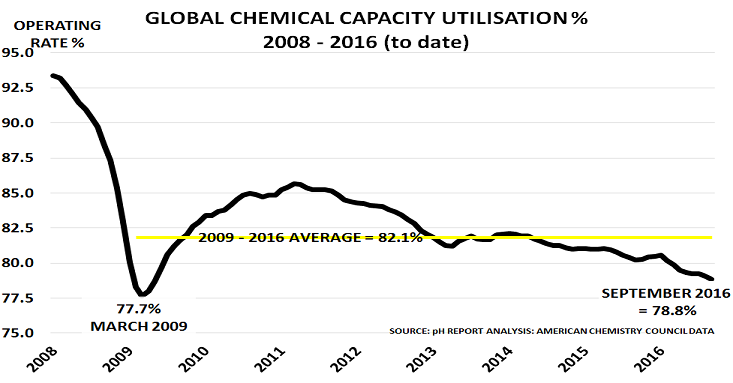 The chemical industry is the best leading indicator for the global economy, and it is flagging major warning signs about the outlook for 2017.  As the chart above shows, based on American Chemistry Council (ACC) data:

And as the ACC warn:

“Growth in the industry has been nearly flat most of the year thus far”. 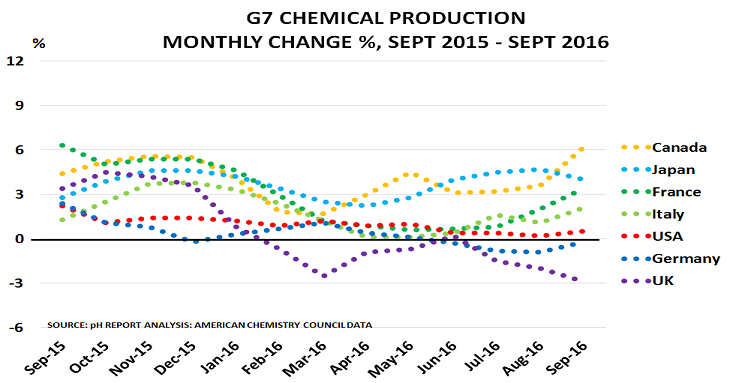 The second chart highlights the position in the G7 countries, responsible for nearly half of global GDP, over the past 12 months.  It shows the change in chemical production, using a 3 month average:

This adds to the disappointing picture in the BRIC economies, which account for over a fifth of the global economy, as I discussed on Friday.  Brazil has been negative for the past 12 months: Russia has collapsed from 15% to 5%;  India has been the best performer, being stable at around 4.5%; China has slowed further from 4% to 3%.

The industry is generally around 6 months ahead of the global economy, because of its early position in the supply chain. Thus in 2008, it was clear from around March that the world was heading into a major downturn.  The Bear Stearns collapse was effectively the “canary in the coalmine”.  My view remains that the Brexit vote at the end of June marked a similar tipping point, as I warned on 27 June.  And as I noted then:

“The global economy is in far worse shape today than in 2008, due to the debt created by the world’s major central banks.”

As in 2008, of course, most commentators are still convinced that everything in the garden is rosy.

I fear, however, that soon they will once again be excusing their mistake, by telling anyone who will listen that “nobody could have seen this downturn coming”.  The reason for their mistake, as in 2008, will simply be that they were looking in the wrong place, by focusing on the positive signals from financial markets.  But these lost their key role of price discovery long ago, due to the vast wave of liquidity provided by stimulus programmes.

Unless we see a rapid recovery in the next few weeks, prudent companies and investors would be well advised to heed the clear warning from chemical markets that global recession is just around the corner.