Skip to content
Home / Chemical industry flags rising risk of global recession in 2017, with Trump set to “clear the decks” at the start of his first term 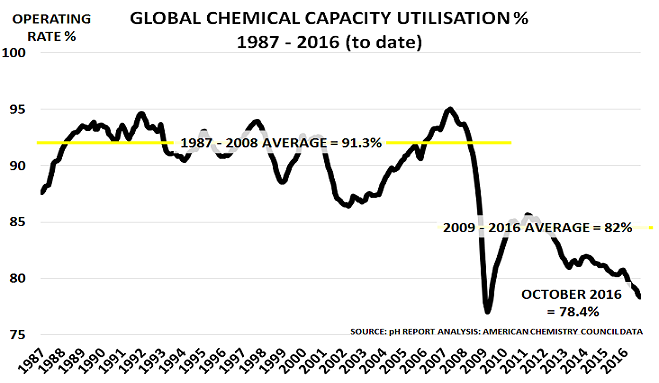 The chemical industry is the best leading indicator that we have for the global economy.  It has an excellent correlation with IMF data, and also benefits from the fact it has no “political bias”.  It simply tells us what is happening in real-time in the world’s 3rd largest industry.

Sadly, the news is not good.

As the chart shows, based on the latest American Chemistry Council data, Capacity Utilisation (CU%) fell to just 78.4% in October.  This is only just above the lowest reading ever seen, of 77% at the bottom of the sub-prime crisis in March 2009. The pattern is also worryingly familiar:

  Then the CU% peaked in May 2007 at 95.1%, before declining to 88% by October 2008, and collapsing to 77%
  This time, the CU% peaked at 80.7% in December 2015 and has been falling ever since, month by month
  Given that the industry is normally around 8 – 12 months ahead of the wider economy, due to its early position in the supply chain, this means it is highly likely that the global economy will move into recession during 2017

Of course, nobody ever wants to forecast recession.  And there are always plenty of reasons why something might be “different this time”.  But it would certainly seem prudent for companies and investors to develop a Recession Scenario for their business for 2017. given the track record of the CU% indicator.

Indeed, there are a number of reasons to suggest that any recession might be severe.  Bill White, the only central banker to warn of the subprime crisis, warned in January that “the world faces wave of epic debt defaults“, and then added in September that:

“The global situation we face today is arguably more fraught with danger than was the case when the crisis first began. By encouraging still more credit and debt expansion, monetary policy has ‘‘dug the hole deeper.’’…In practice, ultraeasy policy has not stimulated aggregate demand to the degree expected but has had other unexpected consequences.  Not least, it poses a threat to financial stability and to potential growth going forward….the fundamental problem is not inadequate liquidity but excessive debt and possible insolvencies. The policy stakes are now very high.”

  When White spoke, the implications of the UK’s Brexit vote were still only just beginning to be recognised
  Since then, US President-elect Donald Trump has announced his 100-Day Plan to reshape America’s world role
  Major uncertainty is building in Europe with Italy’s referendum plus Dutch, French and German elections
  India’s economy is weakening as the currency reforms have taken 86% of its cash out of circulation
  Plus, there are ever-present risks from China’s housing bubble, and the potential for a trade war with the USA

Of course, many of the same people who said that Brexit would never happen, and that Trump would never win, are now lining up to tell us everything will still be the same in the end.  But they should really have very little credibility.

What many investors also seem to be forgetting is that Trump has been a long-time CEO.  And new CEOs normally write-off everything in their first year of office.  This gives them the double bonus of being able to (a) blame the previous CEO and (b) then take credit for any improvement.

As Trump would no doubt like a second term of office from 2021, he has every incentive to “clear the decks” in 2017.