China is the world’s largest market for smartphones and autos – responsible for c30% of global sales for both.  Yet as Reuters notes:

“Most western policymakers and journalists view the world economy through a framework that is 10-15 years out of date, failing to account fully for the enormous shift in activity towards China and the rest of Asia.”

The critical fact is that both markets are now about to go into a severe downturn as a result of the coronavirus epidemic. This is already having a major impact on domestic sales in China, and is starting to create major disruption to today’s globalised supply chains.

SMARTPHONES SALES HAVE BEEN IN DECLINE SINCE 2017

As the chart shows, global smartphone sales were down again in Q4.  2019 sales were 1.4bn, versus their 2017 peak of 1.5bn. And, of course, Q1 is going to be a terrible period for sales, given the coronavirus impacts.

China has been the world’s largest market since 2012, but sales were down 37% in January as consumers began to worry about the risks from the virus.  February will clearly be much worse, as a result of the major lockdowns in place.  As Strategy Analytics warn:

“The smartphone market will be adversely impacted by the slowing GDP growth and the plunging consumer spending. It will also impact global smartphone supply and manufacturing, because China makes 70% of all smartphones sold on the planet.”

Research firms IDC and Canalys are already forecasting that China’s market will be down 40% in Q1. But this is likely an under-estimate, given the impact of the lockdowns.  Most retail stores, including Apple’s, have been shut during February, after all. And as Chinese business paper Caixin reported:

“China’s capital might be officially back to work, but it would be hard to tell from walking around the normally congested city. Tourist sites and other popular destinations remain unusually free of sightseers, customers or pedestrians.”

Outside China, parts arriving in the West today came from factories that were still open before Lunar New Year.  But now, supply chain problems are about to become evident:

And, of course, the recession is also seeing major paradigm shifts take place.

For example, used smartphones are now becoming a viable market in their own right for the first time.  207m were sold last year, up 18% from 2018, and IDC see the market growing to over 300m phones by 2023. As they note:

“In contrast to the recent declines in the new smartphone market, as well as the forecast for minimal growth in new shipments over the next few years, the used market for smartphones shows no signs of slowing down across all parts of the globe. Refurbished and used devices continue to provide cost-effective alternatives to both consumers and businesses that are looking to save money when purchasing a smartphone.”

CHINA’S AUTO MARKET IS IN CRISIS 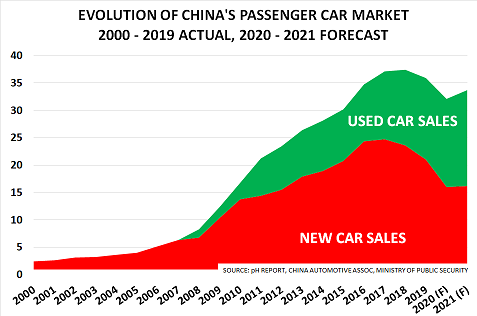 China’s auto market also matters. It is easily the largest in the world, with peak sales in 2017 of 24.7m, versus 17.9m in the USA and 15.3m in Europe.  And without China’s four-fold stimulus-powered sales increase since 2008, the global market would have seen no growth at all.

But today, the used market has become key to auto sales growth, as the chart confirms.  Consensus opinion still believes that its new car sales would continue to grow until at least the end of the decade. But this conclusion fails to reflect the unique nature of China’s market:

China’s used sales rose 8% in 2019, whilst new sales fell 9%. They may well equal new sales this year for the first time, given the collapse underway in new sales.

Thus the virtuous circle of the last decade is turning vicious.  China’s new car sales fell by 90% in February, and salary losses during the lockdowns make it unlikely that the crisis has left a backlog of pent-up demand to create a V-shaped recovery.

THE WORLD WILL SEE MAJOR CHANGE DURING THE RECESSION

People sometimes say they ‘can’t plan until they know what is happening’. But in reality, what they mean is that they have become used to doing tactical planning, based on the idea of ‘business as usual’.  Today, however, we all have to relearn how to plan for uncertainty.

The question now for investors and companies is to start contingency planning for what may happen next.  We have to ask the question – how quickly will used smartphones and cars cannibalise new sales over the next year? Will they take 10%, 20% or more?  And what will happen to prices and margins as a result?

As the saying goes – “to fail to plan, is to plan for failure.”