The world’s 4 main central bankers love being in the media spotlight.  After decades climbing the academic ladder, or earning millions with investment banks, they have the opportunity to rule the world’s economy – or so they think.

But their background is rather strange preparation to take on this role – even if it was achievable:

None of these roles are noted for their contact with ordinary people.  Nor does their habit of flying First Class and staying in top-class hotels, or being chauffeur-driven to meetings, help them to engage with the real world.  Mark Carney’s travel expenses currently average £100k/year ($130k), in addition to his £250k/year housing allowance.

But the main disadvantage is simply that common sense is not a core requirement for the job.  If it was, then none of the stimulus policies enacted since 2000 – subprime, QE, Abenomics etc – would ever have been considered.

Common sense would have told them that people create demand – not economic models or financial markets.  And anyone used to working with real people would know that the key to demand is (a) the existence of a “need”, or at least a “want” and (b) the ability to afford the purchase.

Last week’s announcements by the Federal Reserve and the Bank of Japan highlight the disconnect.  Unsurprisingly, Yellen and Kuroda’s stimulus policies have completely failed to create sustained demand.  Instead, they have destroyed price discovery in financial markets and created asset bubbles instead.

The above chart highlights the irrelevance of their current policies.  As Bloomberg comment in respect of Japan:

“Japan’s economy has been in trouble for decades. Massive monetary and fiscal stimulus have so far failed to spur faster growth. (Last) week, the Bank of Japan met to decide whether to apply yet more economic shock therapy. Here’s the situation the country’s leaders face:

“Japan has the world’s oldest population, as well as a low birth rate and little immigration, but its growth problems go far deeper. In the early 1990s, the country’s postwar growth boom collapsed—decades of deflation followed and Japan started to suffer a shortage of workers….

“Japan’s debt burden far outstrips that of other countries, largely a result of the stimulus introduced to help fix the economy. Abenomics, Prime Minister Shinzo Abe’s rescue plan, has helped to weaken the yen and boost corporate profits but wages and domestic spending have remained fragile.

“Higher debt led the government to consider a sales tax increase for revenue. But the last time it was imposed in 2014, consumer spending and gross domestic product fell, sending the economy into a recession.”

The chart (interactive on Bloomberg itself) confirms this analysis: 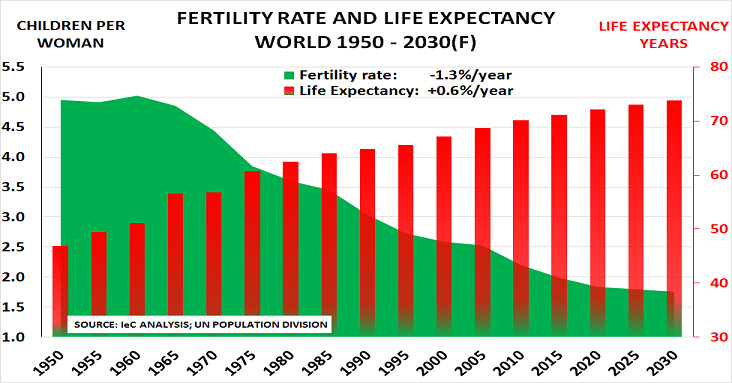 Slowly but surely, the world is realising that central bank policies have been a disaster for the global economy.

Common sense tells us that simplistic “solutions”, such as printing money and lowering interest rates, will never succeed in creating sustainable economic growth.  The real need is for policy to address the cause of the growth slowdown – the impact of the 50% rise in global life expectancy since 1950, and the  50% fall in fertility rates.

Until discussion takes place around the implications of these key facts (highlighted in the second chart), nothing will change, and the debt will continue to rise.  And as the Financial Times commented at the weekend:

“The problem with the authorities rigging the markets is it could be painful when they stop doing it.”

WEEKLY MARKET ROUND-UP
My weekly round-up of Benchmark prices since the Great Unwinding began is below, with ICIS pricing comments:
Brent crude oil, down 56%
Naphtha Europe, down 53%. “A build-up in products supply has punctured refiners’ margins, according to the International Energy Agency, which warned that global refinery runs are experiencing their lowest growth rates in a decade.”
Benzene Europe, down 54%. “A drop in consumption was felt by numerous players”
PTA China, down 41%. “Bearish demand for spot cargoes as endusers laid off buying due to the proximity to the upcoming week-long National Day celebrations in China”
HDPE US export, down 27%. “Weak overall demand in China weighed down on prices”
S&P 500 stock market index, up 11%