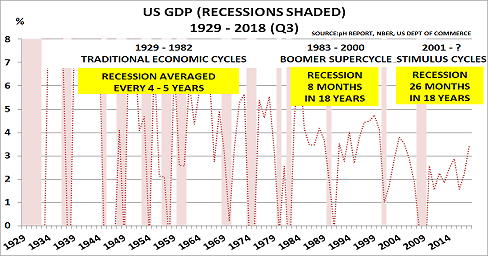 Companies and investors are starting to finalise their plans for the coming year.  Many are assuming that the global economy will grow by 3% – 3.5%, and are setting targets on the basis of “business as usual”.  This has been a reasonable assumption for the past 25 years, as the chart confirms for the US economy:

Since then, the central banks have taken over from the Boomers as the engine of growth.  They cut interest rates after the 2001 recession, deliberately pumping up the housing and auto markets to stimulate growth.  And since the 2008 financial crisis, they have focused on supporting stock markets, believing this will return the economy to stable growth:

In total, the Fed has added $3.8tn to its balance sheet since 2009, whilst China, the European Central Bank and the Bank of Japan added nearly $30tn of their own stimulus.  Effectively, they ensured that credit was freely available to anyone with a pulse, and that the cost of borrowing was very close to zero.  As a result, debt has soared and credit quality collapsed.  One statistic tells the story:

“83% of U.S. companies going public in the first nine months of this year lost money in the 12 months leading up to the IPO, according to data compiled by University of Florida finance professor Jay Ritter. Ritter, whose data goes back to 1980, said this is the highest proportion on record.  The previous highest rate of money-losing companies going public had been 81% in 2000, at the height of the dot-com bubble.”

And more than 10% of all US/EU companies are “zombies” according to the Bank of International Settlements (the central banks’ bank), as they:

“Rely on rolling over loans as their interest bill exceeds their EBIT (Earnings before Interest and Taxes). They are most likely to fail as liquidity starts to dry up”.

2019 – 2021 BUDGETS NEED TO FOCUS ON KEY RISKS TO THE BUSINESS
For the past 25 years, the Budget process has tended to assume that the external environment will be stable.  2008 was a shock at the time, of course, but time has blunted memories of the near-collapse that occurred.  The issue, however, as I noted here in September 2008 is that:

“A long period of stability, such as that experienced over the past decade, eventually leads to major instability.

“This is because investors forget that higher reward equals higher risk. Instead, they believe that a new paradigm has developed, where high leverage and ‘balance sheet efficiency’ should be the norm. They therefore take on high levels of debt, in order to finance ever more speculative investments.”

This is the great Hyman Minsky’s explanation for financial crises and panics. Essentially, it describes how confidence eventually leads to complacency in the face of mounting risks.  And it is clear that today, most of the lessons from 2008 have been forgotten.  Sadly, it therefore seems only a matter of “when”, not “if”, a new financial crisis will occur.

So prudent companies will prepare for it now, whilst there is still time.  You will not be able to avoid all the risks, but at least you won’t suddenly wake up one morning to find panic all around you.

The chart gives my version of the key risks – you may well have your own list:

Of course, wise and far-sighted leaders may decide to implement policies that will mitigate these risks, and steer the global economy into calmer waters.  Then again, maybe our leaders will decide they are “fake news” and ignore them.

Either way, prudent companies and investors may want to face up to these potential risks ahead of time.  That is why I have titled this year’s Outlook, ‘Budgeting for the end of “Business as Usual“.  As always, please contact me at phodges@thephreport.com if you would like to discuss these issues in more depth.