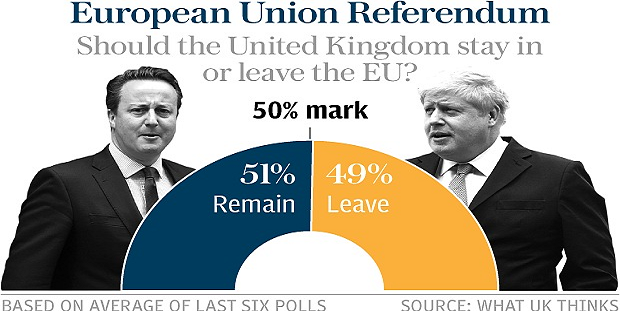 Slowly, but surely, a UK vote to leave the European Union is becoming more likely.  In any referendum, the Yes campaign (in this case called Remain) have to argue a positive case.  But this is not happening in the UK – and the vote is less than 3 months away.  Unsurprisingly, therefore, as the poll above from the Daily Telegraph shows, voters are currently evenly divided on the issue.

The Leave campaign have an easy job in these circumstances.  They simply have to argue it will be “business as usual” after the vote for the UK, Europe and the global economy.  But a moment’s thought makes it hard to imagine anything less likely, given the weakness of political leadership across the continent.

1. NOBODY IS ARGUING THE CASE FOR THE UK TO STAY
UK voters need to be given positive reasons to vote “Yes”, as happened in the 1975 referendum.  Yet, so far, nobody seems capable of doing this, and so the Leave campaign is gaining momentum:

Another problem is that the two major parties – Conservative and Labour – no longer command the same confidence with voters.  In last year’s election, they won only 2/3rds of the vote between them.  By comparison in October 1974, ahead of the 1975 Referendum where the UK confirmed its EU membership, they won 75% of the votes.

Equally important in 1974 was the fact that the 3rd party – the Liberals – won 18% of the votes and also argued for a Yes vote.  But in the 2015 election, the Eurosceptic UK Independence Party came 3rd with 13% of the vote.  So voters are no longer being given a consensus view by politicians whom they trust.

2. OTHER EUROPEAN GOVERNMENTS HAVE SIMILARLY LOST THE VOTERS’ TRUST
We can see the same issue with other major EU governments:

This lack of political consensus would make it very difficult to have a quick Treaty renegotiation to maintain the status quo if the UK did vote to leave – in fact, it might prove impossible for the other 27 countries to agree anything at all.  As former EU senior diplomat and NATO Secretary-General Javier Solana warns:

“Brexit would deal a major economic blow to the UK and the EU. But that is not all. It would also weaken the security, foreign policy, and international standing of both parties.”

3. SCHENGEN’S COLLAPSE HIGHLIGHTS THE PROBLEMS AHEAD
One example of the potential chaos ahead can be seen in the continuing collapse of the Schengen Agreement, as I warned in my BBC interview last summer,  This used to allow borderless travel across large parts of the EU – but even the town of Schengen itself now has border controls on the German side.

According to the European Commission, Germany, France, Austria, Denmark, Norway and Sweden have all re-introduced border controls as a result of the Syrian refugee crisis and the bombing tragedies in Paris and Brussels. Already, therefore, Europe has moved away from “business as usual”.  Few people now expect the Schengen deal to survive.  And as the Commission’s President warned 3 months ago:

“A single currency does not exist if the Schengen fails.”

Against this background, it is very hard to believe that politicians would sit down calmly to develop new arrangements which basically preserved the status quo with the UK.  A Leave vote is far more likely to make the UK the scapegoat for all of the EU’s current problems. It would also create major problems for European financial markets themselves, as I argued last month:

None of us can know the answer.

We can of course hope that all these problems will magically disappear.  But the risks are already much higher than even 3 months ago.  And yet at the same time, there is widespread complacency about the likely outlook.  It is a classic case of an outcome being so painful, people prefer to simply ignore the potential for it to happen.

It is hard to avoid the conclusion that we are living in very uncertain, and potentially very dangerous, times.