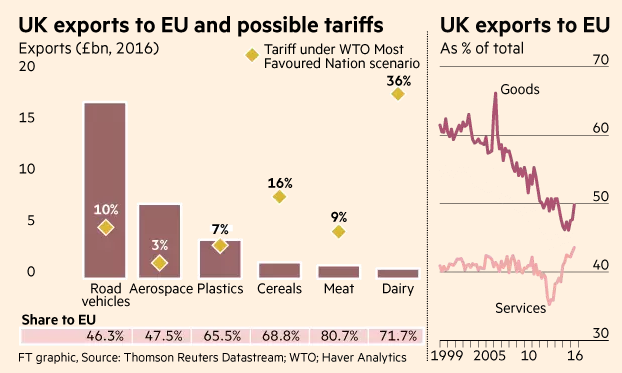 The UK economy set off into the Great Unknown on Wednesday, when premier Theresa May officially notified the European Union of the UK’s intention to leave (Brexit) by the end of March 2019.  In response, the EU released its draft guidelines for the negotiations:

   “The first phase of the negotiations should aim to agree on a divorce settlement on the rights and obligations of the UK.  It would have the goal of providing as much clarity and legal certainty as possible to citizens, businesses, stakeholders and international partners on the future
   “Once that political criteria is met, the EU would be open to talk about a future framework”

Critically, the guidelines confirm that the details of a future relationship and trade deal will only be discussed once the UK has left.  They also suggest that the terms of trade could be very different from today:

“The future relationship as such can only happen when the UK becomes a third country“:

“Any future trade deal cannot amount to being a member of the single market.  It must ensure a level playing field in terms of competition and state aid, and must encompass safeguards against unfair competitive advantages through, inter alia, fiscal, social and environmental dumping.”

“Any future agreement will need to be ratified by national parliaments, which could take up to two years.  Therefore, the guidelines foresee a transitional phase to “bridge” the time between the divorce settlement and when the UK leaves the bloc in 2019, and a future trade deal, which can only be negotiated in detail when the UK is already out.

“Any such transitional arrangements must be clearly defined, limited in time, and subject to effective enforcement mechanisms.”

As I discussed in September, this means that the UK’s trade options – given its “third country” status – are now very limited.  Theresa May has already ruled out continued membership of the Single Market and Customs Union, and refused to accept the jurisdiction of the European Court of Justice.  Therefore, the only 2 options available from March 2019 are a Canadian-type deal, or a fall-back to World Trade Organisation (WTO) rules.

Critically, these alternatives mean there is no “business as usual” option.

Optimists had hoped that nothing would really change post-Brexit.  But today it is clear that the EU, like any club, will not allow non-members to have the same benefits as members. Instead, companies and investors are going to have to learn to live with growing uncertainty as the clock ticks down to March 2019

   A new free trade agreement (FTA) for goods and services might be finalised quickly after Brexit, by 2020-2021
   But it might take much longer, say to 2025 – Canada’s own deal, after all, took 7 years to finalise
   Spain’s move to link a deal to agreement on a new status for Gibraltar might make it impossible to do a deal
   Other EU members might follow, making Brexit a Pandora’s Box with trade held hostage to political issues

We can all hope for the best, but hope is not a strategy.  It therefore seems prudent to assume, as a base case, that the UK will be operating on the basis of WTO rules from March 2019.  It certainly won’t have any FTA deals in place outside the EU by then, given that the UK can’t start to negotiate these until Brexit takes place.

This is not good news as the chart from the Financial Times confirms, given that 50% of all UK goods’ exports and nearly 45% of services’ exports go to the EU:

   The WTO has arbitrary tariffs such as 10% for cars, 7% for plastics, 16% for cereals and 36% for dairy products
   These will increase costs for UK consumers, and reduce the UK’s competitive position in EU and other markets
   In many industries such as chemicals, products move in and out of the UK as part of global supply chains
   Almost inevitably, therefore, companies will start planning to relocate back into the EU, to avoid the tariff

This is the Great Unknown in action, and it will create Winners and Losers.  Winners will plan for a very uncertain future, and create options which will enable them to profit from whatever developments take place.  Losers will bury their heads in the sand, and refuse to prepare for any change.

On Thursday, I will look in more detail at Brexit’s likely impact on the UK consumer, which adds further complications to an already uncertain outlook.