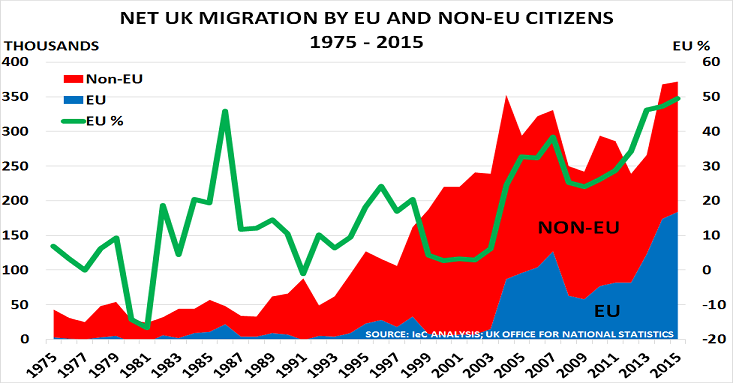 The UK’s Brexit referendum is fast becoming a bitter battle for the Conservative Party leadership.  It is hard to believe that Boris Johnson, who leads the Leave campaign, really cares either way about the issue of leaving Europe:

All the evidence suggests that instead, his real motive for deciding to lead the Leave campaign was that – win or lose – this would make him the likely successor to David Cameron as premier.

The problem for UK voters is that this jockeying for power means that basic principles of debate, such as “Comment is free, but facts are sacred” have been abandoned.  Instead, facts are being treated as mere opinions:

But Johnson refused to change the slogan, saying:

“If you take out the abatement and the money that comes back via Brussels, the figure is obviously lower.  We think it’s relevant to keep people focused on the global figure, because that is the figure over which we have no control.”

Sadly, Cameron was similarly focused on internal Conservative Party politics when he called the referendum. As Martin Wolf has recently argued in the Financial Times:

“This referendum is, arguably, the most irresponsible act by a British government in my lifetime….Right now one can only hope that the country does not soon learn what it means to divorce in haste and repent at leisure”

IMMIGRATION NOW A KEY ISSUE IN THE BREXIT DEBATE
Immigration is another key issue where assertion is being used to whip up anti-EU emotions.  But as the chart above shows, based on official data from the UK’s Office of National Statistics:

“The UK isn’t bound to accept them (non-EU migrants) by any international treaties, but nevertheless let 277,000 of them move over last year alone.”

One is therefore forced to conclude that the new Conservative government, containing many of the Leave leaders, simply decided to ignore the pledge once they were in power.

This behaviour also raises doubts over the new Leave pledge to reduce EU immigration.  It is hard to see how anything will be changed by basing EU migration on the “points-based system” used for non-EU migrants, as this has failed to have a major impact on their overall numbers.

LEAVING THE EU WOULD BE A COMPLEX AND DIFFICULT PROCESS
Most of the UK population have only ever known life within the EU.  And those of us who remember the pre-1973 period, know that today’s world is very different.  Yet Leave have failed to give us any clear picture of what they would do, if the UK votes for Brexit on 23 June.  Instead, as former Conservative premier Sir John Major has warned:

“Vote Leave’s campaign is an unforgivable fraud on British people.”

Critically, the key issue of how Leave would implement Brexit has been dominated by assertion rather than fact:

Equally important is the fact that the UK has had no direct experience of negotiating trade deals for the past 43 years.  These have all been done via the EU, with the backing of other major G7 nations such as France, Germany and Italy.  Almost inevitably, therefore, this lack of experience would lead to us being out-negotiated – particularly as we could find ourselves having to finalise 80 deals in just 2 years, to replace current EU arrangements.

If one focuses on the facts, rather than on the assertions, it therefore seems clear that a Brexit vote would mean taking a complete leap in the dark.  Nobody can know where we would end up, or the damage that would be caused.

Most importantly, as I noted last month, it would put at risk the ”peace and prosperity” that my generation have enjoyed since the EU was founded.  This is why it will be the most critical vote that many of us will ever cast.  I will be voting to Remain, and I hope that my country does too.