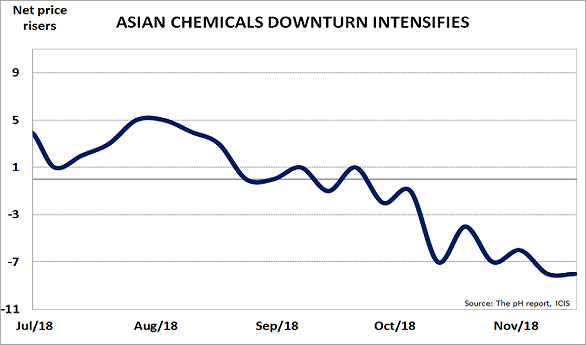 The chemical industry is the best leading indicator for the global economy.  And my visit to Singapore last week confirmed that the downturn underway in the Asian market creates major risks for developed and emerging economies alike.

The problem is focused on China’s likely move into recession, now its stimulus policies are finally being unwound.  And the result is shown in the above chart from The pH Report, updated to Friday:

The question now is whether finance directors will choose to aggressively destock ahead of year-end results, to mitigate the volume decline with a decline in working capital. This would be a bold move given continuing geo-political uncertainty in the Middle East, and would also conflict with the more upbeat guidance that was given earlier with Q3 results.

But a review of ICIS news headlines over the past few days suggests they may have little choice.  Inventories are described as “piling up” in a wide range of major products, including polyethylene – the biggest volume polymer.  Indian producers are even offering “price protection” packages on polypropylene, to safeguard customers from losses if prices fall further.

Asian countries and their major partners (eg Argentina, S Africa, Turkey) were, of course, the first to be hit by China’s downturn.  But Q3’s fall in German GDP shows the downturn has now spread to the Western economy that most benefited from China’s post-2008 stimulus bubble.  As The Guardian noted:

“Goods exports make up 40% of German GDP – a much bigger proportion than for the next two biggest eurozone economies, France and Italy.” 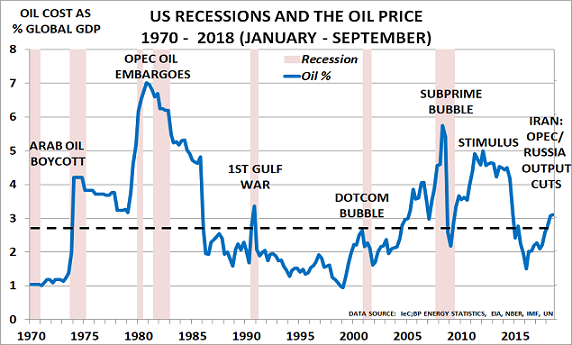 Of course, consensus opinion still believes that the US economy is sailing along, regardless of any problems elsewhere.  But the chart of oil prices relative to recession tells a different story:

Oil markets have therefore provided a classic example of the trading maxim for weak markets – “Buy on the rumour, sell on the news”.

Understandably, oil traders have now decided that his “bark is worse than his bite“.  And with the downturn spreading from Asia to the West, markets are now refocusing on supply/demand balances, with the International Energy Agency suggesting stocks will build by 2mb/d in H1 2019. In response, OPEC are reportedly discussing potential cuts of up to 1.4mb/d from December. 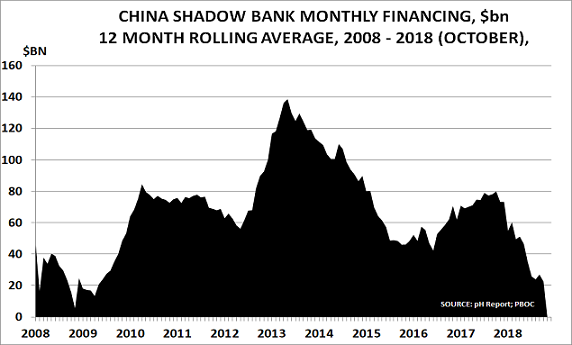 Unfortunately, as in 2008, the collapse in oil prices is coinciding with the end of stimulus policies, particularly in China, as the chart of its shadow bank lending confirms.  This has hit demand in two ways, as I discussed earlier this month in the Financial Times:

China’s post-2008 stimulus programme was the growth engine for the global economy – with the efforts of the Western central banks very much a sideshow in comparison.  It was more than half of the total $33tn lending to date.  But now it is unwinding, prompting the Minsky Moment forecast a year ago by China’s central bank governor:

“China’s financial sector is and will be in a period with high risks that are easily triggered. Under pressure from multiple factors at home and abroad, the risks are multiple, broad, hidden, complex, sudden, contagious, and hazardous.”

As I warned then:

“Companies and investors should not ignore the warnings now coming out from Beijing about the change of strategy. China’s lending bubble – particularly in property – is likely coming to an end. In turn, this will lead to a bumpy ride for the global economy.”

The bumps are getting bigger and bigger as we head into recession.  Asia’s downturn is now spreading to the rest of the world, and is a major wake-up call for anyone still planning for “business as usual”.

* Lending has major seasonal peaks in Q1, so I use rolling 12 month averages to avoid distortions