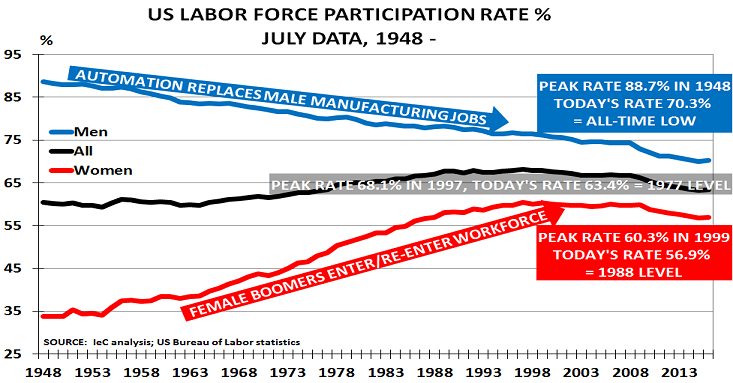 Employment income is critical for most Americans and for the US economy.  The above chart shows how the key factor – the participation rate – has changed since records began in 1948.  It shows July data, to avoid the need for seasonal adjustment, split by Men, Women and Total:

This highlights how the workforce is now missing 12m people, due to the fall in the participation rate.  173m would have been working today if the peak rate of 68.1% had been maintained.  Instead, only 161m were working. Inevitably, therefore, US GDP continues to disappoint.

Yet policymakers ignore this critical fact.  Instead, they pretend that monetary policy can somehow fill the gap created by these missing 12m people.  It would be nice if true, but common sense tells us this is wishful thinking.

The chart also highlights the key reasons why (a) the economy boomed during the Boomer-led SuperCycle and (b) is now seeing slower growth:

□  The key issue driving the SuperCycle was the dramatic growth in female BabyBoomer employment.   Only a third of women were working in the early 1950s, but the rate then nearly doubled as a paradigm shift took place in the status of working women.  As a 2005 National Bureau of Economic Research Study noted – they were no longer “perceived as secondary earners within the family”
□  Instead, women began to routinely return to the workforce after having children.  This not only added to total employment, but also led to a rise in their earnings relative to men – from 62.3% in 1979 to 81.8% in Q2 today.  In turn, this phenomenon of dual-income households (for the first time in history) turbocharged economic growth
□  This growth in female employment also helped to counter-balance the ongoing loss of higher-paying, mostly male, jobs in manufacturing, which were being steadily replaced by technology.  More than a quarter of US employees worked in manufacturing in 1970, but this percentage had fallen to only one in ten by 2010.
□  US manufacturing employment fell from 19.6m in 1979 to 13.7m in 2007 – but the majority of this loss only took place after 2001, as companies realised the potential of IT-led automation

These are not difficult trends to reverse, if policymakers were willing to do this.  They would, however, involve initially difficult conversations with voters – which is why neither Presidential candidate are likely to raise the key issues.

US GDP COULD RESUME GROWTH IF POLICYMAKERS ADDRESSED THE DEMOGRAPHIC ISSUES
The US is not like Japan, where the population is now actually falling.  Instead, its population has been growing quite strongly.  There were 267.8m people in July 1997 when the total participation rate peaked, compared to 324m in July.

But the demographics of the population continue to change quite significantly:

□  15% of the polulation is currently aged 65 or over, compared to 11% in 1979, whilst life expectancy at age 65 has risen to 84.3 for men and 86.6 for women.  Yet there has been no discussion about raising the retirement age, even though the Social Security trust fund will be exhausted within 13 years
□  Similar myopia dominates the racial make-up of the workforce.  Bureau of Labor Statistics data shows that unemployment is far higher amongst Blacks (11.3%) and Hispanics (7.4%) than for Whites (5.3%).  Even more disturbing is that Blacks earn only 80% of the average wage, and Hispanics just 77%, compared to Whites at 103%
□  This matters because Blacks are 12% of the 18+ population, and Hispanics are 16% – and, of course, these percentages are rising all the time as 92% of all US population growth since 2000 has been in Minority communities

These problems won’t go away just because policymakers choose to ignore them.  They will simply get worse, and make it even harder to reach an agreed solution.  Historians will not be kind when they come to discuss this failure.

WEEKLY MARKET ROUND-UP
My weekly round-up of Benchmark prices since the Great Unwinding began is below, with ICIS pricing comments:
Brent crude oil, down 59%
Naphtha Europe, down 60%. “Naphtha market still bearish”
Benzene Europe, down 53%. “Spot numbers drift lower. Weak outlook for oil/energy pricing”
PTA China, down 42%. “G20 shutdowns unconfirmed, producers remain in discussions with authorities”
HDPE US export, down 33%. “Weak demand for PE in China seemed to continue in the near term, hence the price gain might be limited”
S&P 500 stock market index, up 12%
US$ Index, up 18%