For the past 20 years, the major central banks have fooled themselves, and the public, into believing they could somehow conjure up growth by effectively printing babies.  After the dotcom bubble and the subprime crisis, they simply doubled down on their failed policy. But as Evergrande’s default confirms, they have simply created a massive debt bubble.

As the chart shows for both the USA and China, all this debt has failed to create GDP growth:

It has been value destruction on an epic scale.  Finally, though, the European Central Bank’s Isabel Schnabel recognised last week that its:

Coincidentally or otherwise, this late recognition happened just as Evergrande, the world’s most indebted property developer with $300bn of debt, went into its long-awaited default.

As I noted here 3 months ago:

“An Evergrande default could reset the Chinese and global economy”

And I then followed up with further warnings here and in the Financial Times on the likely consequences. It was the most-read letter of the week, noting:

“The bubble was based on China’s massive post-2008 stimulus programme, which essentially became “subprime on steroids”. And unfortunately, it led many suppliers outside China to expand capacity in the belief that China had suddenly become middle class by western standards.

“Investors now risk another acute case of buyers’ remorse, given that real estate is 29 per cent of China’s gross domestic product. Many financial market valuations are, after all, at more extreme levels than in 2008, due to the belief that China’s demand growth is unstoppable.”

The problem is that everyone wanted to believe that economics was a scientific discipline, rather than a debate about different opinions.

The difference is that in science, the same result has to happen every time if the theory is to be proved. But there is no such proof possible with economics. Instead, it relies on a series of outdated computer models for its conclusions.

This is how the US Federal Reserve came to believe that house prices could never fall, and so ramped up the subprime crisis until it almost destroyed the global financial system.

One might have hoped after this, that the central banks would have listened to those of us who warned repeatedly here, and in the Financial Times, that this would happen. But that hope proved naive.

Instead, China was encouraged to launch its ‘subprime on steroids’ programme. , This led to millions of empty apartments being built around China. Importantly, it also led suppliers to ramp up production around the world to supply the speculative bubble.

But now China is rowing back on the policy. President Xi keeps reminding people that “houses are for living in, not for speculation”. And the central banks are suddenly panicking about the debt they have created. 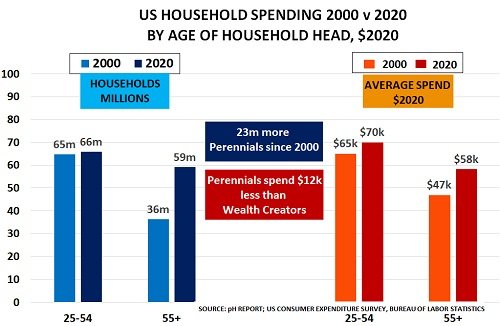 The key issue is that it is people who create wealth, not computer models and debt. And as the chart shows, we are now living in a completely different world from when all the models were created:

This was the background against which the Federal Reserve was essentially trying to ‘print babies’ with its stimulus programme. And now, as Evergrande defaults, the debt bubble created by the central banks is highly likely to burst. It is time for the central banks to give up their outdated economic models, and focus instead on the science of demographics.