Nearly two-thirds of people in the world’s top 25 countries feel their country is heading in the wrong direction, according to a new poll from Ipsos MORI.  As their chart shows:

  China, Saudi Arabia, India, Argentina, Peru, Canada and Russia are the only countries to record a positive feeling
  The other 18 are increasingly desperate for change

The poll confirms that the UK’s Brexit vote, and Donald Trump’s election, were just early signs of the fact that most people feel the current economic/political/social system is not working for them.  Worryingly, given the votes due over the next 6 months, the poll shows that French adults (89%), Italians (82%) and Germans (69%) are even more upset than American (63%) and British voters (60%).

This highlights the fact that none of our political leaders are prepared to tackle the really critical issue of our time – how does the world cope with the combination of vastly increased life expectancy and the collapse of fertility rates?

  In 1850, average Western life expectancy was around 40 years
  Increasing life expectancy meant that by 1950, this had become the start of middle age
  Today, anyone aged 40 is only half-way through their expected life
  By 2050, on current trends, average life expectancy will be around 100 years

This change would be dramatic enough on its own.  But it is being accompanied by a collapse in fertility rates.  These have been below replacement levels of 2.1 babies/woman since 1970, meaning that there is a growing shortage of people in the economically critical Wealth Creator 25 – 54 age group.

It is therefore no surprise that GDP growth is unimpressive.  The New Old 55+ generation already own most of what their need, and their incomes decline as they enter retirement.  Essentially, therefore, the ageing of the BabyBoom generation means that we have traded 10 years of extra life expectancy for growth.

I haven’t met anyone who is unhappy – from a personal viewpoint – with this trade.  The problem is that policymakers chose to ignore the social, political and economic consequences.  Instead they tried to compensate for this slower growth by printing money.  But all this has done is to create vast levels of debt, which can never be repaid. 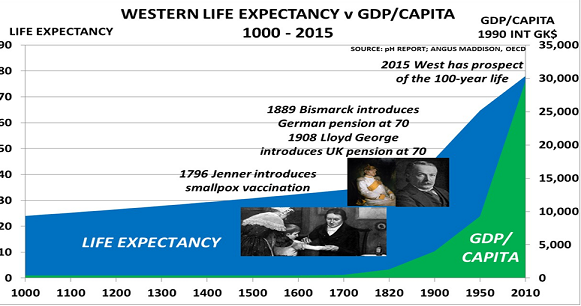 The second chart highlights the longer-term background to today’s position.  It shows Western life expectancy versus GDP/capita, and highlights the dramatic nature of the changes now underway.  These began in 1796 when Edward Jenner’s discovery of smallpox vaccination suddenly changed life expectancy:

  200 years ago, life expectancy was 35 years in the developed world.  Smallpox infected 60% of the population – and 20% died of it. But after 1796, life expectancy began to rise quite rapidly. As a result, the life cycle began to change.  No longer were people born, then usually worked from an early age, and then died – instead an education stage was added, and GDP rose as parents could pass on learning to their children
  100 years ago, life expectancy had reached 50 years, and the Western economy was growing fast in terms of GDP/capita – leading Germany and then the UK to introduce the concept of the pension.  This added another new stage to the life cycle as people were born, educated, worked, retired and then died. But the number of pensioners was still small, 600k in the UK out of a 43 million population
  Today, Western life expectancy is around 80, and is around 20 years at age 65.  And due to the collapse of fertility rates, a G7 economy such as Italy will soon have nearly as many people in the New Old 55+ cohort as in the Wealth Creator 25 – 54 cohort.  Another new stage needs to be added to the life cycle – where we are born, are educated, work, and then retrain in our 50s/60s, before working again until we retire and then die

This is the key economic, political and social issue of our time. And until policymakers wake up to its implications, the Populists will continue to triumph.  Ordinary people are not stupid.  They can see that stimulus programmes don’t produce the promised results.  As the poll shows, they understand that we are going in the wrong direction.

Today, we therefore need leaders with vision and common sense to set out a plan for living in a world where the 100-year life is becoming normal.