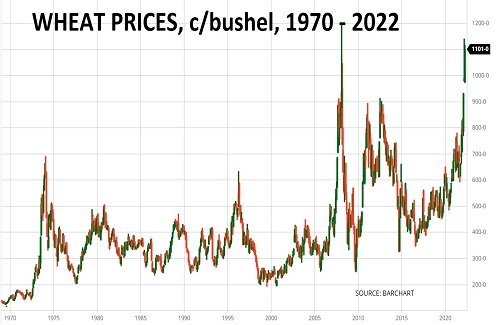 Understandably, the World Bank and IMF’s warning about the risk of famine failed to hit the headlines, given the crisis in Ukraine. But it is no less important because of that. Millions of people are set to starve as Russian/Ukrainian wheat output (29% of global production) is hit by the war, and fertilizer costs rocket along with gas prices.

“The world is shaken by compounding crises. The fallout of the war in Ukraine is adding to the ongoing COVID-19 pandemic that now enters its third year, while climate change and increased fragility and conflict pose persistent harm to people around the globe. Sharply higher prices for staples and supply shortages are increasing pressure on households worldwide and pushing millions more into poverty. The threat is highest for the poorest countries with a large share of consumption from food imports, but vulnerability is increasing rapidly in middle-income countries, which host the majority of the world’s poor. World Bank estimates warn that for each one percentage point increase in food prices, 10 million people are thrown into extreme poverty worldwide.”

“The rise in food prices is exacerbated by a dramatic increase in the cost of natural gas, a key ingredient of nitrogenous fertilizer. Surging fertilizer prices along with significant cuts in global supplies have important implications for food production in most countries, including major producers and exporters, who rely heavily on fertilizer imports. The increase in food prices and supply shocks can fuel social tensions in many of the affected countries, especially those that are already fragile or affected by conflict.”

The problem is two-fold, as I noted at the beginning of April:

“So there is an increasing risk of famine in certain parts of the world.”

As the chart shows, wheat prices are already close to all-time record levels. And as German news magazine Spiegel reports:

“Now that a significant share of this supply has vanished from the tightly woven global market, it has created a shockwave that can be felt in many areas of the world, including the Horn of Africa and the Middle East. Fewer deliveries are arriving in countries like Lebanon, Egypt and Yemen, which import almost all of their cereals from Ukraine and Russia. Prices could now explode, making food unaffordable for millions of people. Since the beginning of the war, the price of wheat has already risen by 40%.”

The problems are also hitting the developed world. Already prices are rising in Europe as the Financial Times reports:

“A loaf of bread currently costs up to €8 per kilo in Milan. It would have cost an average of €4.25 in November, according to Coldiretti, the national agriculture trade organisation.”

The World Bank suggests that across Asia and Africa, the proportion of household income spent on food is predicted to rise from 20% to 30% over the next year — a 50% increase. And the problem will get even worse in 2024.

Essentially, the problem is a timebomb which is set to explode over the next few months unless governments work together to increase arable planting, establish emergency stocks, and subsidize fertilizer costs whilst gas prices remain at today’s record levels.