As promised last week, today’s post looks at the impact of the ageing of the BabyBoomers on the prospects for economic growth.

The fact that people are living up to a third longer than in 1950 should be something to celebrate.  But as I noted in my Financial Times letter, policymakers are in denial about the importance of demographic changes for the economy.

Instead, their thinking remains stuck in the past, with the focus on economists such as Franco Modigliani, who won a Nobel Prize for “The Life Cycle Hypothesis of Savings”, published in 1966.  This argued there was no real difference in spending patterns at different age groups.

Today, it is clear that his Hypothesis was wrong.  He can’t be blamed for this, as he could only work with the data that was available in the post-War period.  But policymakers should certainly have released his theories were out of date.

The chart highlights the key issue, by comparing average US and UK household spending in 2000 v 2017:

Amazingly, despite this data, many policymakers still only see the impact of today’s ageing Western populations in terms of  likely increases in pension and health spending.  They appear unaware of the fact that ageing populations also impact economic growth, and that they need to abandon Modigliani’s Hypothesis.

As a result, they have spent trillions of dollars on stimulus policies in the belief that Modigliani was right.  Effectively, of course, this means they have been trying to “print babies” to return to SuperCycle levels of growth.  The policy could never work, and did not work.  Sadly, therefore, for all of us, the debt they have created can never be repaid.

This will likely have major consequences for financial markets. 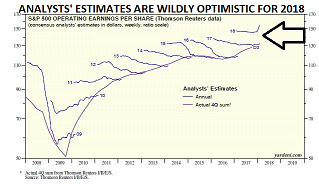 As the chart from Ed Yardeni shows, company earnings estimates by financial analysts have become absurdly optimistic since the US tax cut was passed.

And they have been blind to potential for a global trade war, once President Trump began to introduce the populist trade policies he had promised in the election.  Last week’s moves on steel and aluminium are likely only the start.

Policymakers’ misguided faith in Modigliani’s Hypothesis and stimulus has instead fed the growth of populism, as the middle classes worry their interests are being ignored. This is why the return of volatility is the key market risk for 2018.