10 years ago, I took a look ahead at what we could expect in the next decade, as discussed last week.

Unfortunately, we now face the major economic and social crises that the chart predicted, if policymakers continued with ‘business as usual’. 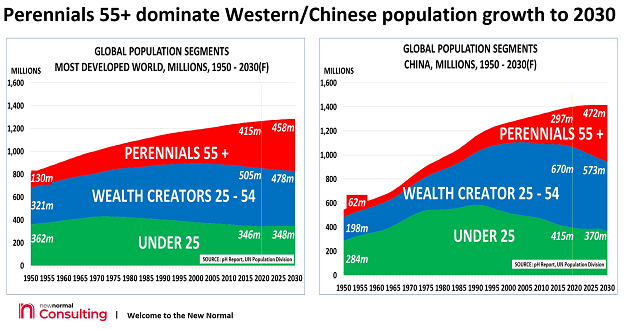 This week, I want to look ahead at what we can expect to see by 2030.  The charts above capture the main issue:

As a result, the Perennials will dominate population growth in the major economies of the West and China over the next decade.

This has never happened before in the history of the world. So it is impossible to be sure how it will impact the economy, business and financial markets.

One thing we do know, however, is that the Perennials are a replacement economy, as they already own most of what they need.

And like the Millennials, they are short of cash. They have to worry about living on a pension, whilst the Millennials suffer from tuition fees debt and over-priced housing costs.

It is therefore critical that we focus on understanding the key paradigm shifts that are now underway as a result of these massive changes. They will create major opportunities for those willing to abandon ‘business as usual’.

Sustainability, and the ability to do more with less, are likely to be key to success as the New Normal develops. 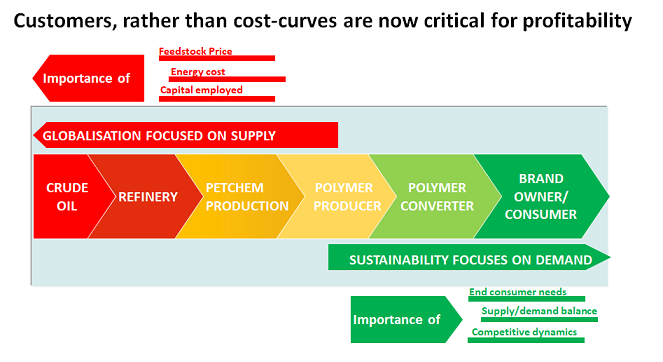 DEMAND PATTERNS
Energy markets have seen a major paradigm shift, with Q2 2020 providing a taste of the world to come. We are now living in a world of energy abundance.

It already makes economic sense in some regions to ‘scrap and build’ – in terms of scrapping older, fossil fuel-based infrastructure, and replacing it with modern renewables-based power sources.

This confirms that ‘cost-advantaged feedstock’ is no longer a critical success factor when considering new investments, especially with BP forecasting $100/tonne carbon taxes by 2030.

The US shale-based expansions in oil, gas and chemicals are in the eye of the storm, as I have long-argued here.  And OPEC faces a wake-up call on its hopes for higher oil prices and growth.

The lockdowns have also broken down the inertia surrounding work and home-based routines. Travel, leisure, construction, real estate and other industries will likely see major change as a result.

Companies and investors need to focus on demand rather than supply, by evolving from today’s product focus to a solution orientation. 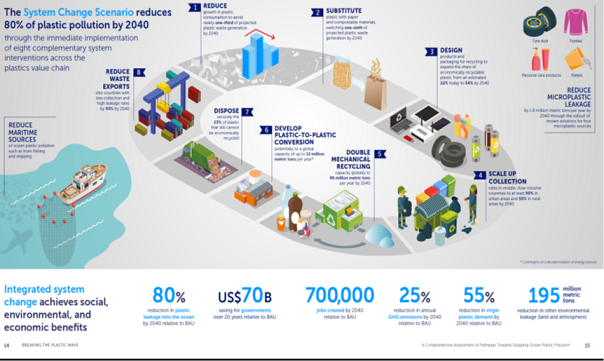 These problems are unlikely to quickly disappear, making it essential to closely monitor developments in all the major end-uses on a segment by segment basis, rather than assuming ‘one size fits all’.

The need to reshore supply chains in a world of potential energy abundance suggests that moves towards a circular economy will accelerate.

It also makes no sense to continue using centuries-old technology such as stirred-tank reactors when digital, continuous & biotech-enabled technology is safer, greener, faster and cheaper.

The EU’s Green Recovery deal is just one example of the new opportunities that are likely to develop:

Thinking ‘out of the box’ will likely create a goldmine for those innovative companies who focus on scaling the new business models in their chosen region(s).