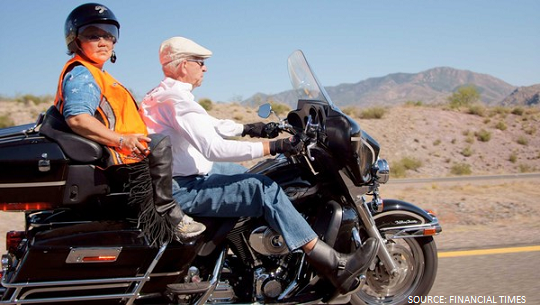 What do you do if your core customers disappear? Go bankrupt, or find new ones? That’s the issue facing many companies as the West heads over the ‘demographic cliff’.

But today, as the picture shows, Harley Davidson is still selling its bikes. It has developed new models designed for ageing Boomers. This New Old 55+ generation is much fitter and has much longer life expectancy than any previous generation. There are also a lot of them, as the Boomers are the largest generation that has ever lived, as well as the wealthiest.

The average age of a US motorcycle rider is now 49 years as a result. The secret of success is that Harley’s bikes have been redesigned to meet the needs of an older customer. They thus feature heated seats and handlebars. Some models also have a gear shift that can be moved with the foot, so the riding position is less hard on the knees.

Most companies will face this kind of win-lose choice in coming years. The constant growth of the Boomer SuperCycle from 1983-2007 has come to an end. But with around 30% of the Western population now in the New Old 55+ generation, there are plenty of new opportunities for those with flexibility and vision.