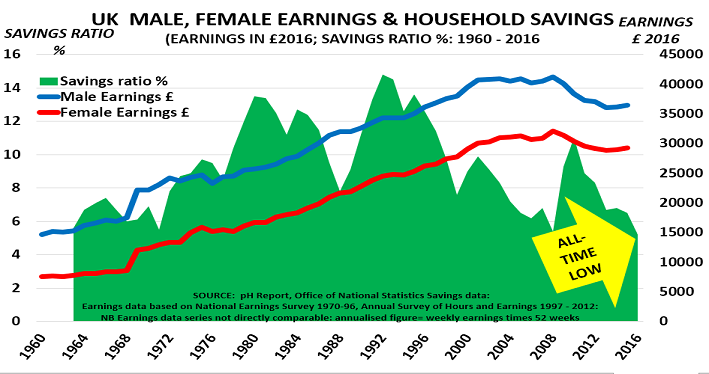 □  ”Public sector debt remains at near-historic highs (in peace time!) and for the first time this public sector debt comes with a private sector bubble
□  Credit card debt is rising at its fastest rate in a decade — 9.3% in the year to February
□  Unsecured debt as a whole is rising at more than 10% and some 6,300 new cars are bought on credit in the UK every day”

Companies and investors already face growing uncertainty as March 2019 approaches, as discussed on Monday.  UK consumers now face similar challenges as their spending power is further squeezed by the pound’s fall in value since June, as the chart confirms, based on official data:

   UK earnings for men and women have been falling in real terms since the financial crisis began in 2008
   Male earnings are down 5% in £2016, and female earnings down 2%
   Since June, unsurprisingly, cash-strapped families have had to raid their savings to fund consumption
   New data shows the UK savings ratio hit an all-time low of just 5.2% last year – and was only 3.3% in Q4

One key issue is that monetary policy has reached its sell-by date, with Retail Price Inflation hitting 3.2% in February as a result of the pound’s fall.  Interest rates may well have to rise to defend the currency and attract foreign buyers for government bonds.  Foreigners currently fund more than a quarter of the government’s £2tn ($2.5tn) borrowing, and cannot easily be replaced.

Unfortunately, these are not the only risks facing the UK consumer.  As I feared in June:

“   Many banks and financial institutions are already planning to move out of the UK to other locations within the EU, so they can continue to operate inside the Single Market
   There is no reason for those which are foreign-owned to stay in the country, now the UK is leaving the EU
   This will also undermine the London housing market by removing the support provided by these high-earners
   In addition, thousands of Asians, Arabs, Russians and others will now start selling the homes they bought when the UK was seen as a “safe haven”

Lloyds, the global insurance insurance market, has just announced plans to move an initial 100 out of 600 jobs to Brussels, so that it can continue to serve EU clients.  Frankfurt, Paris, Amsterdam, Dublin and Copenhagen are also lining up to offer attractive deals to companies wishing to maintain their EU passports to trade.  And last month saw an ominous warning from JP Morgan Chase CEO, Jamie Dimon:

“The clustering of financial services in London is hugely efficient for all of Europe.  Now you’re going to have a de-clustering, which creates huge duplicative cost which is expensive to clients. Nevertheless, we have no choice.”

Dimon’s warning was reinforced on Tuesday by the leader of the powerful European People’s Party in the European Parliament, who told reporters 100k financial services jobs would likely relocate from London due to Brexit:

“EU citizens decide on their own money. When the UK is leaving the EU it is not thinkable that at the end the whole euro business is managed in London. This is an external place, this is not an EU place any more. The euro business should be managed on EU soil.”

Until now, many consumers have been cushioned from the fall in real incomes by the housing bubble.  But as I discussed in December, the end of such bubbles is normally quite sudden, and sharp:

Certainly it would be no surprise if prices did now start their long-overdue collapse, as highly-paid financial professionals start to leave the UK.  One key indicator – the vastly over-priced 9 Elms development – now has an astonishing 1100 apartments for sale.  And if the housing market does collapse, then recession is inevitable.

The key problem is that consumers do not have many options when the economy moves into a downturn. New sources of income are hard to find if mortgage costs start to rise.  All they can do is to cut back on spending, and boost their savings – to help them cope with any future “rainy days”.  This in turn creates a vicious circle as consumption – over 60% of the economy – starts to fall.

There are therefore no easy answers when trying to plan ahead for likely storms.  But being prepared for a downturn is better than suddenly finding oneself in the middle of one.