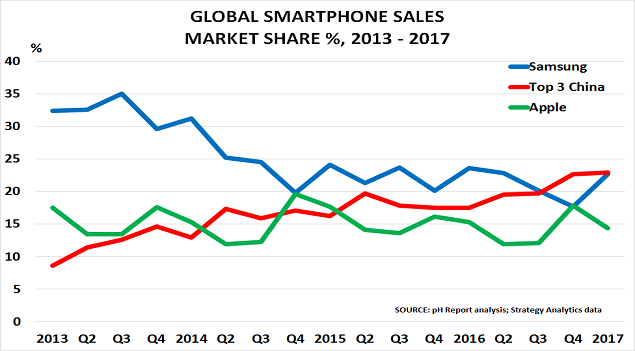 □  They took 22.9% of the market compared to 22.7% for Samsung and 14.4% for Apple
□  In terms of individual smartphone sales, OPPO’s R9s smartphone reached the No. 3 position worldwide
□  It was still behind Apple’s iPhone 7 and iPhone 7Plus, but ahead of Samsung’s aging Galaxy J3 and J5 models

“OPPO is largely unknown in the Western world, but its brand is wildly popular in China and growing rapidly across India. The R9s is OPPO’s flagship 4G device with key features such as dual-SIM connectivity and fingerprint security.”

This confirms the trend that developed during 2016 as I noted when reviewing 2016 data, ‘Smartphone profits under threat as market goes ex-growth‘:

“The issue is that 3.1bn people now own smartphones, and the other 4.2bn can’t afford them.  So inevitably, the market is going to focus more and more on price.  Of course, millions of people will still want to own an iPhone or Galaxy.  But price will become the deciding feature for many people.” 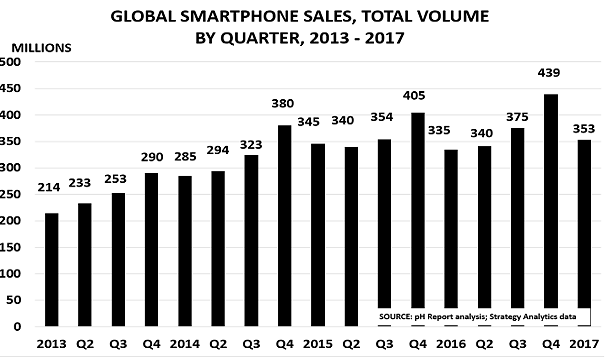 The impact can be seen throughout the smartphone eco-system.  Consolidation is the normal response when market growth begins to slow.  As the second chart confirms, Q1 sales at 353m were only up 2% versus Q1 2015, when the global market began to plateau.  The low-cost Chinese players are now gaining share in the mass-market versus Apple and Samsung as premium pricing disappears, and the micro-vendors are also being squeeezed:

□  This price pressure led to Apple losing out in China to cheaper models with similar features
□  The “Top 100+” micro-vendors were also squeezed, and were collectively down 8% versus Q1 2016
□  The success of low-cost larger producers meant the “Top 30+” gained 8% versus Q1 2016

Samsung are most at risk at the moment, as they recover from the Galaxy Note 7 problems.  Their sales fell around 60% in China – the world’s largest market.  They are now launching the new Galaxy S8 model to rebuild their position, but will also face strong competition in H2 with Apple’s 10th anniversary iPhone.

The same process of consolidation has, of course, already played out in the smartphone software market, where Google’s Android system is now the dominant player.  It has 86% of the market, with only Apple’s iOS system (14%) still competing against it.  Apple therefore has to get everything right with the 10th anniversary iPhone – if it fails to excite, then Apple’s entire business model of combining hardware with software will be at risk.