Skip to content
Home / Tokyo queues for torches, not iPads 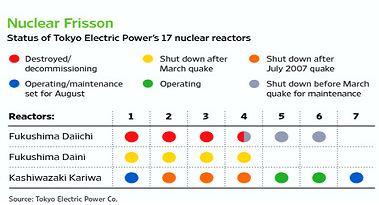 Sadly, we still seem no closer to a solution to Japan’s nuclear nightmare at the Fukushima Daiichi plants. It is now certain that there will be no quick ‘return to normal’.
Tokyo itself accounts for ~40% of Japan’s economy. And life there is already quite different from its pre-disaster pattern, with all non-essential lighting dimmed or turned off, and heating at low levels.
Most noticeably, according to the Financial Times, torches and batteries – not the iPad – have become “the most sought-after technology”, as people seek to cope with rolling blackouts. As the WSJ chart shows above, Tokyo Electric’s (TEPCO) 17 nuclear reactors are in crisis.
Only 2 are in full operation (green dots). 4 of those at Fukushima (red) are destroyed, whilst the other 2 (grey) are unlikely to restart soon, given local outrage at the company’s performance. 3 reactors at Kashiwazaki Kariwa (orange dots) are still shut, 4 years after the earthquake there.
The WSJ notes that up to 23% of TEPCO’s generating capacity may therefore be shut over the summer, when demand soars for air conditioning. And the situation may become worse, if damaged generating plants are included.
In turn, of course, this will impact industry and the lengthy supply chains that carry key components from Japan to the rest of the world. Just one example, again from the FT, gives a sense of the scale of the problem:
• Renesas Electronics make 40% of the microcontrollers used in the world’s cars. Most cars use between 50 – 100, to open windows etc.
• Their main factory, at Naka, will not restart until at least July, as the earthquake damaged the ‘clean room’ where semi-conductors are made.
• It is unclear what will happen to customer orders, once current inventories run out in May. Currently, the plant still has no electricity.
The blog has been visiting Japan since 1987. Even with these vivid examples, it still finds it hard to take in the full extent of the problems. Its fear is that as time goes on, we will learn the hard way, just how bad the disaster has been.