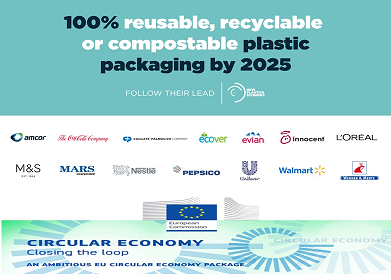 Europe’s plastics industry is under major threat from the growing legislative and consumer backlash against plastic packaging.

As with the global industry, its licence to operate is increasingly challenged by images of plastic rubbish polluting the world’s oceans, alongside photos of baby fish dying because their parents mistakenly fed them plastic instead of food.

EU legislation on plastic packaging is already in place to respond to this concern and promote the arrival of the circular economy. The industry therefore now needs to urgently reinvent itself by developing solutions to tackle these problems and help reduce carbon footprint.

History, luckily, is on its side.  There was a similar turning point in the 1960s, when it implemented the far-sighted decision to switch from coal to oil-based feedstocks. As a result, it transformed itself into a world-leading source of the products that have now become embedded in our daily lives. And it maintained this lead for more than fifty years, until finally China’s growth allowed Asia to overtake it.

But over the past twenty years, however, it has stagnated as China became the manufacturing capital of the world since joining the World Trade Organisation in 2001. Its newest steam cracker, a core technology for the production of chemicals and plastics, started up more than twenty years ago in 1994. And over the past decade, the North American industry has seen a $200bn renaissance due to the arrival of low-cost shale based feedstocks.

This decline matters as chemicals and plastics are central to the European economy, and a key enabler for a vast range of products from autos through to personal care. The industry directly employs 1.5 million people, and a much larger number indirectly in downstream manufacturing and service roles.

Plastics are also key to tackling a number of the challenges facing our society, as the EU has highlighted in its new Circular Economy strategy:

But at the same time, the legislation highlights the urgent need to rethink the production, use and consumption of plastics in order to avoid the environmental damage currently being created.

The problem is that reuse and recycling of end-of-use plastics remains very low by comparison with other materials such as paper, glass or metals:

The European plastics industry is therefore now at a crossroads, as continuing with a business as usual strategy makes little sense. After all, the new EU legislation requires all plastics packaging to be reusable or cost-effectively recyclable by 2030. And the Ellen MacArthur Foundation is successfully encouraging the world’s major brand owners and retailers to make similar commitments with an even tighter deadline of 2025.

This paradigm shift gives the European plastics industry the opportunity to stage its own renaissance. It urgently needs to start the technical development programmes that will allow it to adopt the circular economy agenda, and start substituting recycled feedstock for oil.

China, after all, is already moving down this track, with Hainan planning to ban the production, sale and use of the 120kt  single-use plastics currently used each year in the province by 2025. And the government is starting to build dozens of local “comprehensive resource utilisation” centres to boost recycling, whilst at the same time restricting the use of single-use plastics by courier and food delivery firms.

Obviously there will be costs involved.  But in principle the industry’s assets are ageing and often below world-scale. The scale of the write-offs required is therefore manageable. And by beginning the transition today via the use of chemical and mechanical recycling technologies, these costs could be amortised over a longer timeframe.

The industry has a remarkable record of generating revenue and profit growth from innovation. Reinvention to become a more service-based industry, focused initially on making a major contribution to reducing marine pollution, would enable it to regain its global leadership in an area where long-term growth is assured.

And who knows, if Hollywood were ever to issue a remake of 1967’s The Graduate, maybe Mr McGuire’s famous advice to a young Dustin Hoffman would become “There’s a great future in recycled plastics”.