Skip to content
Home / The world’s real estate bubbles start to burst, as central banks pivot to focus on inflation 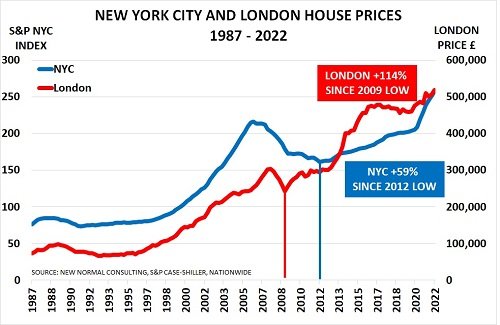 “Why do you think I would want to buy your insulation material?”, asked the Chinese property developer in Harbin. “Because temperatures here go down to -20 °C in the winter“, replied my friend. “But nobody is going to live in these apartments. They are for speculation. They don’t need insulation“, replied the developer, laughing at his naivety.

Millions of speculative apartments have been built on this basis in China during its post-2008 real estate bubble, as I have discussed before. And as noted then, this meant the home price/income ratio for Beijing was an eye-watering 42.

But it isn’t only China where the central banks ‘easy money’ policies have created dangerously large bubbles. Even Germany’s Bundesbank admitted last week that they were:

“Worried about banks lending to overextended buyers in an overheated property market”.

And then there is this warning about US Federal Reserve policy from the former ‘bond market king’, Bill Gross:

“I suspect you can’t get above 2.5% to 3% before you crack the economy again. We’ve just gotten used to lower and lower rates and anything much higher will break the housing market.”

As the chart shows, we have been here before:

Instead of allowing the market to find its natural floor, central banks around the world went for “subprime on steroids”.

The problem was they convinced homeowners that prices would never fall. And so buyers stopped worrying about the need to repay the mortgage at the end of the term.

Instead, they focused on whether they could afford the monthly payment.  And so if mortgage interest rates fell from 5% to 2.5%, they were happy to borrow twice as much and still pay the same each month. 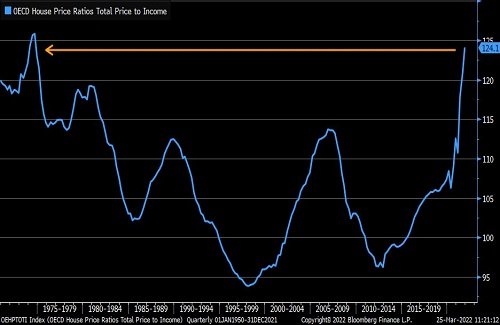 But now rates are going in the opposite direction, very fast.

The benchmark US 30-year rate has almost doubled over the past year from 2.65% to 5.02%. It seems set to go higher as the Federal Reserve suddenly remembers that its main job is to keep inflation under control.

Understandably, buyers are disappearing from the market Housing agency Fannie Mae reports that a record 73% of Americans think that it is a bad time to buy a home. And as CNBC report:

“Rising interest rates are crushing the mortgage market, as precious few homeowners can now benefit from a refinance and more potential homebuyers become priced out.”

Mortgage demand across the USA is now down 40% from a year ago. And the usual spring surge – when homeowners typically rush to put their homes on the market – is about to begin. This year’s surge is also likely to see a lot of pent-up sales.

Many owners were naturally worried in 2020/2021 about strangers entering their homes when the pandemic was raging. So there could be a lot of eager sellers, and not many buyers.

As the OECD chart shows, the problems aren’t just confined to the US, UK, Germany and China. Their average house price/income ratio is now back to the highest level since records began. And the problem for homeowners is that potential buyers are already starting to disappear as mortgage rates rise – and affordability reduces.