Skip to content
Home / The car market is crashing 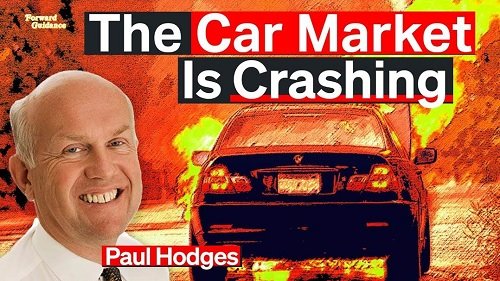 The car market is entering a severe recession as I discuss in this Forward Guidance interview. Sales volumes and car prices are falling sharply around the world. And at the same time, major changes are underway as the market transitions from gasoline/diesel to electric/autonomous cars.

Russia’s invasion is proving a game-changer for the EV market. As the International Energy Agency’s (IEA) Outlook reports:

“The global energy crisis triggered by Russia’s invasion of Ukraine is causing profound and long-lasting changes that have the potential to hasten the transition to a more sustainable and secure energy system”.

This is quite a turnaround for the IEA, which was set up in 1974 to safeguard OECD energy supplies after the first Arab Oil Boycott. Until now, its response to an energy crisis has always been to propose increased investment in fossil fuel production. But now, its stance has changed, even though it notes that Russia is “the world’s largest exporter of oil to global markets”.

This reflects the major progress made over the past decade with cost reduction in solar/wind output. In turn, this has created growing momentum for the shift away from Internal Combustion Engines (ICEs) to Electric/Autonomous Vehicles (EV/AVs). This is critical for reducing oil demand, as the IEA notes:

“There are 1.3bn passenger cars on the road today and they accounted for nearly 25% of global oil demand in 2021.” 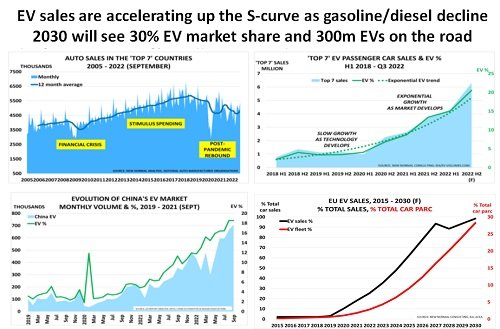 The chart shows the scale and speed of the change now underway. EV sales are accelerating up the S-curve, even as ICE sales decline:

China leads the world in EV sales. They are up 86% this year, with the exemption from purchase tax now extended to December 2023. And it is also leading in AVs, with companies like NIO rolling out battery-swapping stations alongside BP and others. 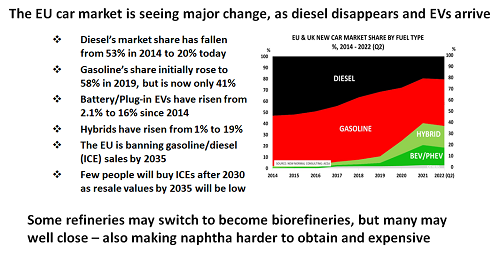 Europe confirms the speed of the change now underway as the chart shows:

The US starting to catch up quickly, with California following the EU and banning ICEs from 2035. 12 other states follow California, so at least 1/3rd of the US market will ban ICEs by then. And the impact starts with the 2026 model year.  35% of new sales will have to be zero-emission vehicles by then.

The whole auto supply chain is also at risk. The move to EVs has already led the US suppliers association to suggest 30% of its members could go out of business. EVs are inherently simpler to make and maintain. So many products currently used to cool autos and operate their 2000+ moving parts will also no longer be needed. Nor will annual servicing.

Winners and Losers are therefore inevitable in the world’s largest manufacturing industry. Companies and their suppliers have to manage fixed costs to survive the recession. But they also have to invest in EV/AVs if they want to have a business in the future.