The result is that Apple continues to capture most of the profits in the value chain, even though it doesn’t manufacture any part of the iPhone itself. It takes 2/3rds of total profit, based on 1/3rd of global revenue. Samsung, the market leader, takes just 17%.

As noted here in the past, Apple is also continuing to develop more service-based offerings, which will further insulate it from margin pressure. Offerings such as iCloud, Apple Music are being sold in the same way as iPods and the Apple Watch, based on the service they provide, and the user-experience – instead of just the function.

Apple’s other new strategy is to keep older models in the market for longer, whilst reducing their price as newer models enter the market:

Apple aficionados will always want the latest version. But now, buyers who don’t care about having “the latest model” can buy an Apple product at a more reasonable price. This, of course, boosts Apple’s Gross Margins still higher, as they can spread their fixed costs over a larger number of phones. 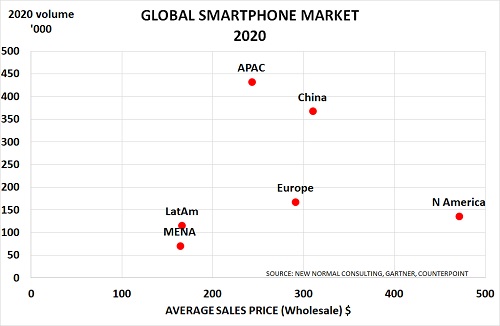 The second chart highlights another key issue – the growing regionalisation of the market.

Market segmentation of this type went out of fashion in the SuperCycle, when buyers would happily max out on their credit cards to keep up with their friends. But it is now key for the future, as buyers become more choosy over how they spend their hard-earned cash.

Business is more complex as we move into the New Normal, and companies refocus on being demand-led, rather than supply-driven. This will be very good news for techno-commercial people, who can help them make the necessary trade-offs between consumer benefit and price.