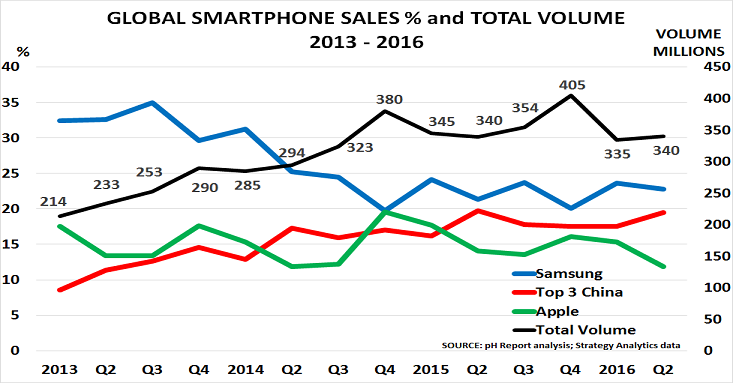 Its been a great run for the smartphone industry, but the party is now coming to an end.  As the chart shows, global sales in H1 fell 1% versus 2016, based on Strategy Analytics data:

Apple’s major problem is in China, where it refused to offer a cheaper version of the iPhone to tap into the mass market.  Even the 4-inch iPhone SE went on sale in March at $630 for the 64GB version. And Chinese manufacturers have been quicker to add new features such as dual-lens cameras and LED screens.  As I noted over a year ago:

“It is only a mater of time before its highly profitable niche marketing strategy comes under full-frontal attack from Korea and China.”

Its Q2 sales fell by a third versus last year in value terms, with local Chinese manufacturers turning up the heat in terms of price and features as China Daily notes:

“Due to the limited upgrades on the existing flagship—iPhone 6s/6s Plus compared with the previous generations and the low demand of the newly launched small-sized iPhone SE, the company has faced a fierce competition with local smartphone vendors in the medium range market priced between 2,500 yuan ($375) to 3,500 yuan per unit.” 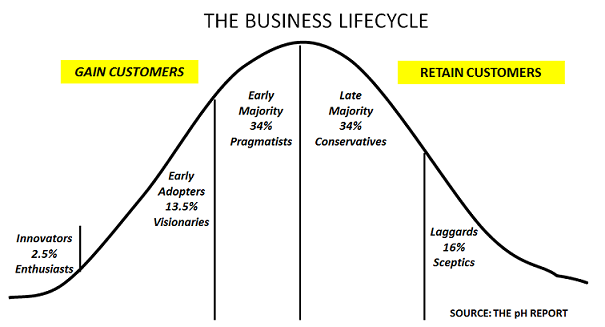 This pattern suggests that the smartphone market is moving into the right-hand side of the Business lifecycle, as shown above:

  We can all remember the early Enthusiasts for its phones, who camped out overnight to get their chosen model
  The Early Adopters were also keen on the iPhone’s features and the status that it gave, as the market grew
  But in the last 2 years, the market has become saturated, and the range of new features has been relatively small
  Globally, the smartphone market has peaked, as the 4.1bn people without phones cannot afford the internet

As a result, market drivers have changed from “the excitement of the new” to “affordability and price competitiveness”, particularly since the cost of making a smartphone fell to just $20 in China a year ago.

China’s Xiaomi was the first to offer low-cost and well-featured phones via the internet.  But they became distracted with overseas launches and widening their product range beyond phones.  As a result, newcomer Oppo now leads the China market with 23% market share, followed by Huawei with 17% and Vivo with 12%.  Apple was 4th with just 9%.

Of course, this doesn’t necessarily mean the end of the road for Apple.  It has long recognised that the market will become commoditised, and has been moving its focus to services and applications.  The Apple watch has clearly the potential to build a totally new market in healthcare, if the right value proposition can be developed.

But the message for anyone supplying the smartphone market is obvious.  If you can’t provide better and better features at lower and lower costs, and in time to catch the market opportunity, you will be out of business very quickly.