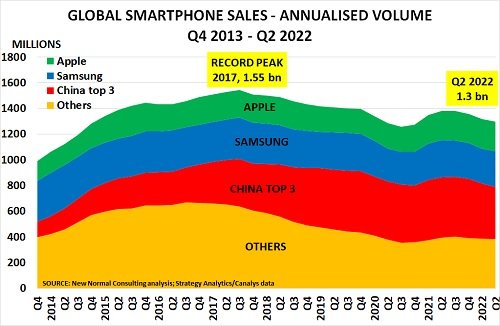 Global smartphone sales fell again in Q2 and are now down 16% from their Q3 2017 peak, as the chart shows.  Covid-related supply issues combined with geopolitical issues to reduce supply and demand. And consumers tightened their purses as the recession continued to develop, cutting back on non-essential purchases. 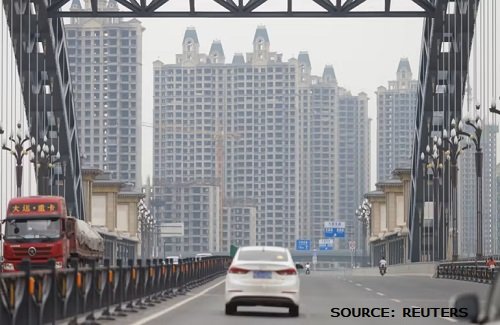 One key factor is the slowdown in the Chinese market, which has been the main growth area in recent years.  Disposable incomes are still very low in China, averaging just $7.5k in urban areas and only $3k in rural areas, according to official data:

But today, as the photo shows, the bubble is bursting. There are millions of unfinished apartments in major areas such as Henan. And over 300 million Chinese have stopped making mortgage payments on them, as Nikkei report.

Adding to the problems, the zero-Covid policy pushed China’s commercial capital, Shanghai, into recession in H1. Its GDP was down 5.7%. 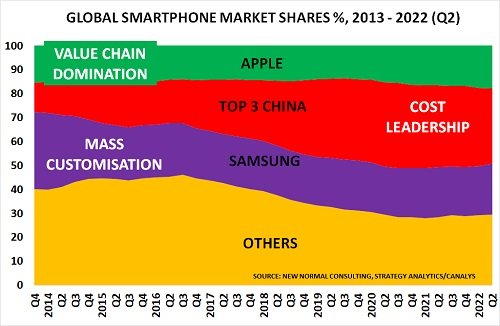 Unsurprisingly, the smartphone market is suffering, with China’s ICT Academy reporting that China’s domestic market was down 22% in H1.  And as Vivo note:

“Consumers are also upgrading handsets less frequently. It used to be 16 to 18 months, but recently it’s been 36 months”

Price-cutting is common.  Even Apple was finally forced to cut prices on its flagship phone in order to retain market share versus the main Chinese brands:

It seems that my forecast when reviewing Q1 results in coming true:

“Apple’s sales have been fairly steady over the past decade, averaging around 15% of the market. And its position was protected until recently by Samsung as the market leader. It produced lower-quality phones at a mid-market price, allowing Apple to focus on the premium market.

“But now Samsung’s market share has fallen from 1/3rd of the market to around 20%. And the quality of the low-cost producers in China such as Xiaomi, OPPO and Vivo has been improving all the time. This means the market has become much more competitive.

“Already Apple has had to start cannibalising its own market by selling older iPhones at mid-market prices.”

Recession always makes people reassess their priorities. And the data suggests that the smartphone market itself has now gone ex-growth.  Not only have sales clearly peaked:

Higher food and energy prices will further hit demand in H2, as the war and the recession continue. In turn, this will likely impact suppliers to the industry, adding a new element to the downturn.