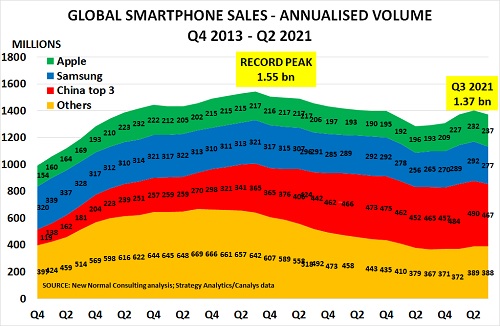 Global smartphone sales took a hit in Q3, disappointing those who had hoped the economy might be moving into full recovery mode. And the market continues to see a major shift in consumer preferences: 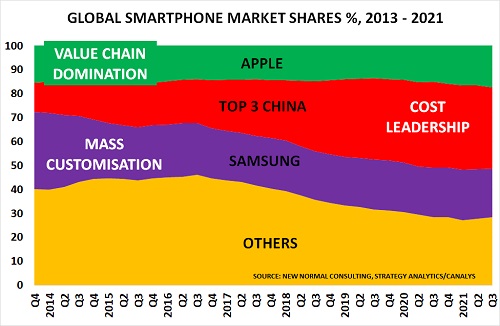 The real winners in terms of market share, however, have been Chinese suppliers, as the second chart confirms.  The Top 3 companies had just an 8.6% share in Q1 2013. But today, this has increased 4-fold to 34.6%. And there is no reason to believe they have yet peaked.

They have, after all, seen major shifts within their own individual market shares over the period.  Huawei, Lenovo and Xiaomi were the initial key players:

The history highlights the underlying strengths of the Chinese players, who have focused on being the low-cost players.  They have become more successful as they went up the experience curve. In the process they have squeezed the middle ground, and the role of other smaller players.

Samsung’s loss of market share is quite remarkable in terms of its rapidity. It wasn’t that it did anything wrong – it recovered very well from the Galaxy Note 7’s battery fires in 2016. But it failed to see the way the market was developing – and was squeezed as the middle ground disappeared.

Apple nearly suffered the same fate. But just in time, it changed its policies and began to price older iPhones very aggressively as it launched new higher-priced models.

It also realised that the next battleground would be services – including iTunes and software. It had $3.7bn revenue from this sector in Q1 2013. And this rose nearly 5-fold by Q3 this year to $17.5bn.

Once you have signed up to an Apple service, it is hard to cancel and start again somewhere else. And, of course, the revenue stream is much more reliable than selling hardware.  Apple is taking a small bite from your wallet each time, and not relying on you being able to afford a big-ticket ticket purchase like a new iPhone all the time.

Other industries have been rather slow to learn the lessons from Apple’s success. Selling ‘stuff’ was a great way of earning profits during the BabyBoom, when most people owned relatively little. But the millennials, like the ageing Boomers, already own most of what they need. So selling services, and experiences, is likely to be a far more successful route to revenue and profit growth as we move into a Net Zero world.