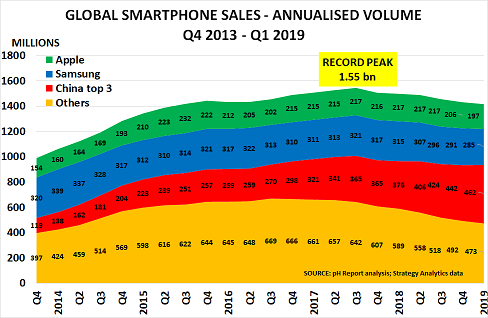 The bad news continues for the world’s smartphone manufacturers and their suppliers.  And President Trump’s decision to add a 25% tariff on smartphone component imports from China from June 25 is unlikely to help. Morgan Stanley estimate it will add $160 to the current US iPhone XS price of $999, whilst a state-backed Chinese consumer boycott of Apple phones may well develop in retaliation for US sanctions on Huawei.

Chances are that a perfect storm is developing around the industry as its phenomenal run since 2011 comes to an end:

This downbeat news highlights the fact that replacement cycles are no longer every year/18 months, but have already pushed out to 2.6 years.  Consumers see no need to rush to buy the latest model, given that today’s phones already cater very well for their needs.

Apple’s volumes confirm the secular nature of the downturn, as its volume continued the decline seen in 2018 as the iPhone comes to the end of its lifecycle. Its market share also fell back to 13%, allowing Huawei to take second place behind Samsung with a 17.9% share.  This decline came about despite Apple making major price cuts for the XS and XR series, as well as introducing a trade-in programme. Meanwhile, Samsung saw its profits fall 60%, the lowest since its battery problems in 2017.

The President’s tariffs are also set to impact sales, as manufacturers have to assume that today’s supply chains will need to be restructured. Manufacturing of low-end components can perhaps be easily relocated to countries such as Vietnam and other SE Asian countries.  But moving factories, like moving house, is a very disruptive process, and it is certainly not easy to find the technical skills required to make high-end components – which represent the core value proposition for consumers.

This highlights how second-order impacts are often overlooked when big announcements are made around tariffs and similar protectionist measures.  Not only do prices go up, as someone has to pay the extra costs involved. But companies along the supply chain see their margins squeezed as well – Apple suppliers Foxconn and Pegatron saw their gross margins fall to 5.5% and 2.3%, the lowest level since 2012, for example. So they will have less to spend on future innovations. 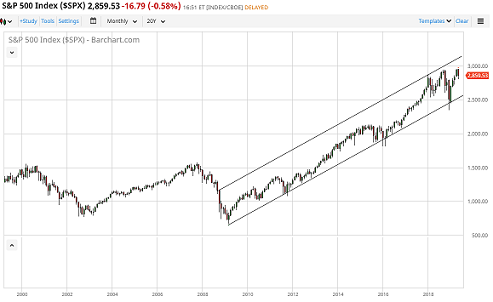 We can, of course, all hope that the current trade war proves only temporary. But President Trump’s decision to embargo Huawei from US telecom equipment markets suggests he is digging in for a long battle. Ironically, however, Huawei was one of the few winners in Q1, with its volume surging 50% despite its planned 2018 US entry being cancelled due to congressional pressure.  And other governments seem notable reluctant to follow the US lead.

The bigger risk, of course, for investors is that the profit downturn caused by protectionism cannot be “solved” by central bank stimulus. Since 2009, as the chart of the S&P 500 shows, they have rushed to support the market whenever it appeared poised for a return to more normal valuations. But it is hard to see how even their fall-back position of “helicopter money” can counter the impact of a fully-fledged trade war between the world’s 2 largest economies.