Another 3 months, another decline in global smartphone sales. And more pressure on mid-market players like Samsung, as China’s low-cost producers continue to gain market share. As the chart shows:

Samsung’s mid-market positioning is the key problem, as the world divides between low-cost and high perceived value:

But everyone else, including Samsung, are being squeezed. Market share for the  “Others” category was an all-time low of just 28% – down from 46% in 2016.

The problem is that total volume is now falling, as the chart based on Canalys/Strategy Analytics data confirms. 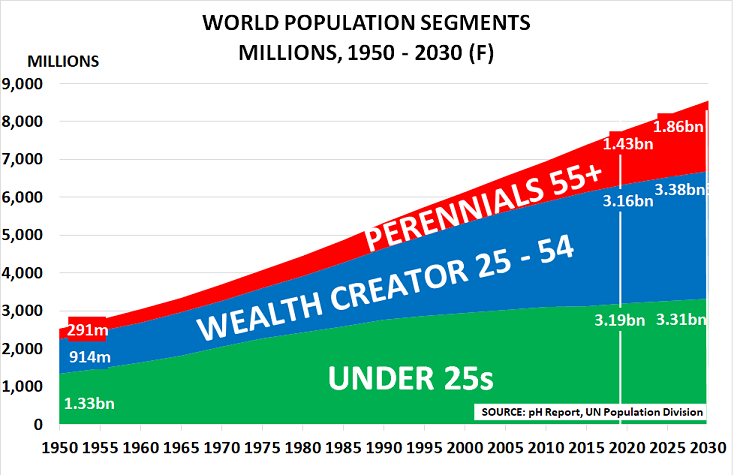 The smartphone market is another sign that the BabyBoomer SuperCycle is over. Volume is falling, and competition is becoming cut-throat as consumers become more careful with their money.

The low-cost segment is now the growth area, as cash-strapped consumers cut back on the mid-market – so-called ‘affordable luxury’. And Samsung’s “mass customisation” business model traps it in the mid-market:

As the chart shows, mid-market was a great place to be in the SuperCycle. Global population was surging from 2.5bn in 1950 to over 7bn by 2010. And most of the growth was in the Wealth Creator 25 – 54 age range.

Their numbers trebled from 914m in 1950 to over 3bn. And their incomes were rising as they moved ahead in their careers. So they had the money to buy new toys like cellular phones, gaming consoles and then smartphones.

But now, everything has changed. The global population is no longer growing because more babies are being born.  Instead, it is growing because of increasing life expectancy.  People no longer die around pension age, as they did in 1950.  instead, a whole new generation is alive today, the Perennials 55+ generation:

Every company on the planet is being impacted by this change. Some will be smart and change their business models. Others will go bust as their hopes for a return to “business as usual’ are disappointed.