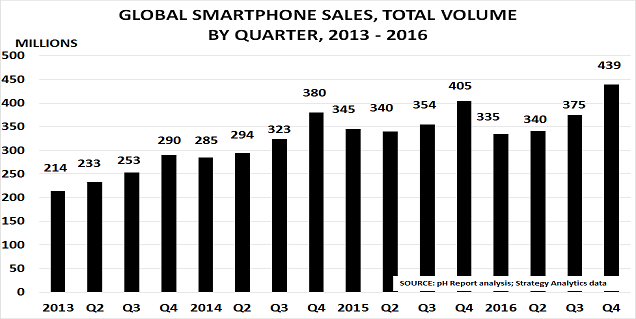 The outlook is becoming clearer for the global smartphone market, and it confirms my judgement in November, when reviewing Q3 sales:


“It seems likely that a focus on price and affordability will come to dominate. In turn, pricing pressures on suppliers will intensify. The key challenge facing the market is that it has gone ex-growth.”

As the two charts show: 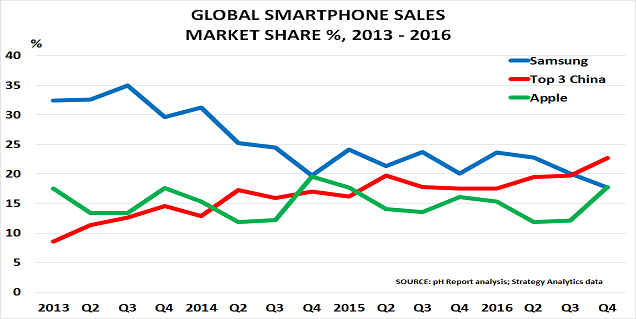 Chinese manufacturers are therefore likely to be the major winners in the future.  Their individual positions have changed over the years, as fierce competition took its toll on companies such as Lenovo and Xiaomi.  But as the second chart highlights, Q4 suggests the Top 3 Chinese players are now starting to collectively outsell both Samsung and Apple.

The issue is that 3.1bn people now own smartphones, and the other 4.2bn can’t afford them.  So inevitably, the market is going to focus more and more on price.  Of course, millions of people will still want to own an iPhone or Galaxy.  But especially as the world moves into recession, price will become the deciding feature for many people.

Regional sales volumes also suggest that we have reached a turning point:

□   China accounts for around a third of global smartphone sales, and Apple’s Q4 revenue was down 12% in the Greater China region.  This highlights once again its failure to introduce a more competitively priced model to compete with local suppliers.

□   Apple’s position in India, the other key emerging market, is even worse. As recently as 3 years ago, Apple had planned to be selling 10 million iPhones in India by now. But as in China, its insistence on maintaining Western pricing models means its growth has stalled.  Apple sold just 800k-900k iPhones in Q4, and like other manufacturers has been badly hit by premier Modi’s demonetisation programme.  Most Indian phones are bought with cash, and Apple’s sales have since collapsed by 30% – 35%.  This is also a major issue for the entire industry, which had been expecting to profit from the launch of Reliance’s new Jio service.  This offers free 4G data service until the end of March and  has already gained 72 million users.

□   Sales in other major markets have clearly plateaued. W Europe was down 3% in Q4, with Germany and France down 10%. The US only managed a 3% rise, after a fall in Q3, despite high levels of promotional activity. Russia stood out with a 10% rise in demand in 2016 as the currency stabilised with the oil price. But sales in Latin America were down 1%, and the Middle East/Africa was up just 1%.

Essentially the market has now become saturated, with price likely to become the main competitive weapon.

Samsung and Apple may hope for some gains as 4G and 5G networks are rolled out, but 2017 is likely to see profit margins under pressure from Chinese competition everywhere – for manufacturers and their suppliers.