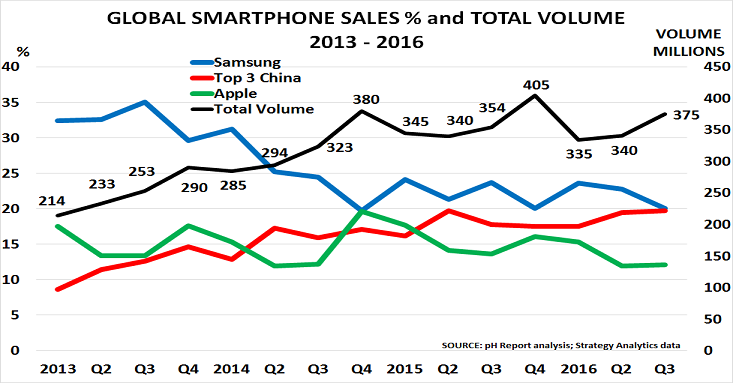 The global smartphone market reached a fork in the road in Q3, and that was before Samsung’s disaster with the enforced recall of the Galaxy 7 model.  What happens next is not yet clear, but it is likely that a focus on price and affordability will come to dominate.  In turn, pricing pressures on suppliers will intensify.

The key challenge facing the market is that it has gone ex-growth, as the chart shows:

The problem, as I noted last quarter, is that:

The market has become saturated, and the range of new features has been relatively small.  Globally, the smartphone market has peaked, as the 4.1bn people without phones cannot afford the internet”.

Now, of course, the pressures of too much capacity chasing too little demand are becoming more and more obvious. And instead of China being a key market for importers, it is now becoming a major exporter with companies such as Huawei, OPPO, Vivo and Xiaomi leading the way, as analysts IDC note:

“Upcoming players have delivered value-packed devices that offer consumers top-shelf features at a fraction of the cost compared to the market leaders. Phones like the OPPO R9 and the Vivo X7 have become serious competitors in China and are also witnessing mild success in Western Europe thanks to new athletic sponsorships across various countries.”

Even more interesting, is that competition is intensifying from the bottom end of the market, as Strategy Analytics note.  The top 100 Microvendors saw their combined share rise by 27% in Q3 to take a 15% share of the global market.  Over the same period, the share of the Top 30 manufacturers rose by just 3%.

This is good news for consumers, who benefit from new features and increasingly cut-throat competition.  But it is not good news for suppliers to the industry, particularly those supplying more standard parts.  As Reuters reports, they are suffering from “unprecedented pricing pressure”, with even Apple pressuring suppliers for lower prices as its volume growth slows.

The market is set to get even more competitive as companies fight to profit from Samsung’s problems.  Affordability will clearly be the key factor.  But companies such as Huawei are also adding new features to lure consumers – such as a memory facility, that enables the phone to automatically put most-used apps within easy reach. This will challenge Apple as well, whose users currently have to reorder apps manually to suit their needs.

This quarter may provide some relief from the battle as consumers order for Christmas, and market share pressures reduce with Samsung’s loss of the Galaxy 7.  But this is likely to be the calm before the storm,

2017 may very well see a bloodbath develop as Samsung tries to regain its market share.  And who knows what will happen once President-elect Trump’s protectionist agenda starts to be implemented.