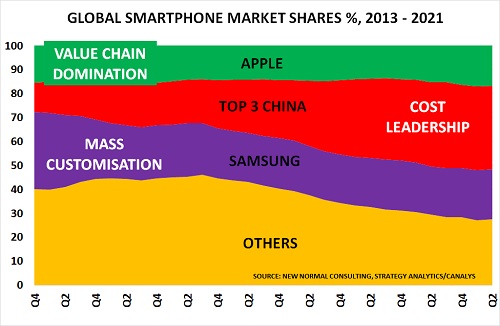 Smartphone sales confirm that global markets are continuing to pivot to the New Normal world. Back in 2014, Samsung dominated with its mid-market positioning. But since then, its position has been squeezed as the market polarises between low-cost Chinese suppliers and Apple’s focus on adding services.

Every third smartphone used to be a Samsung. And only one in ten phones were Chinese. But today, as the chart confirms, the positions have sharply reversed:

The market is effectively polarising. And Samsung is caught in the middle, with no easy way to reinvent itself.

It cannot compete with the volume focus of the 3 main Chinese players. where Xiaomi’s hardware margin is just 5%. Nor can it match Apple’s focus on adding services to support profitability. Apple’s gross margin on services is close to 60%, versus 35% for the iPhone: 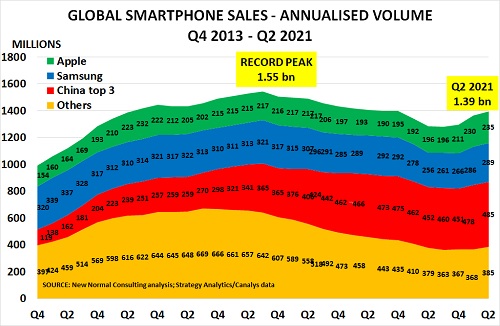 Samsung’s core issue is that the global smartphone market peaked in Q3 2017 at 1.55bn as the chart shows, and has been slowing ever since. 4bn people already own a smartphone, and most of the other 3.9bn can’t afford one.

Annualised volume was down 10% from the peak in Q2 at 1.39bn. And as I forecast back in 2017, competitive pressures have increased quite rapidly as the market slowed:

“It seems likely that a focus on price and affordability will come to dominate. In turn, pricing pressures on suppliers will intensify. The key challenge facing the market is that it has gone ex-growth.”

THE NEW NORMAL WORLD IS POLARISING

Another sign of the move into the New Normal world, as Gartner note, is that marketing budgets are tumbling as competitive pressures hit margins. They have hit an all-time low this year at just 6.4%, almost half of the 12.1% peak in 2016.

Formerly very successful companies such as Samsung are most at risk:

The New Normal world creates a stark choice for most companies. Doing nothing – and hoping for a return to ‘business as usual’ in the Old Normal – will inevitably lead to a continuing decline in revenue and profits. Instead, they have to focus on being either the lowest-cost supplier, or on rapidly developing a more service-based offering.