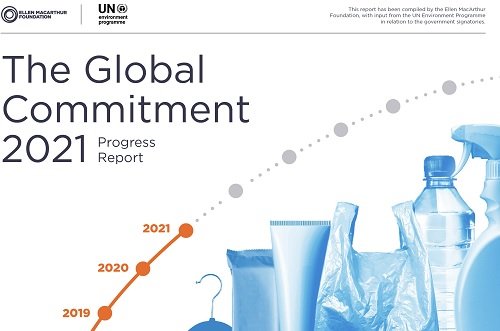 Plastics producers are now being squeezed from both ends of the value chain. Upstream, the growing demand for Electric Vehicles is starting to lead to refinery closures, reducing feedstock availability. Downstream, brand owners are stepping up the pressure for increased use of recycled plastic, as the new Global Commitment report from the Ellen Macarthur Foundation confirms.

These risks have been developing for some time. But now they are moving from theory to practice. Companies have relatively little time to respond, given the announced 2025 and 2030 deadlines for change. 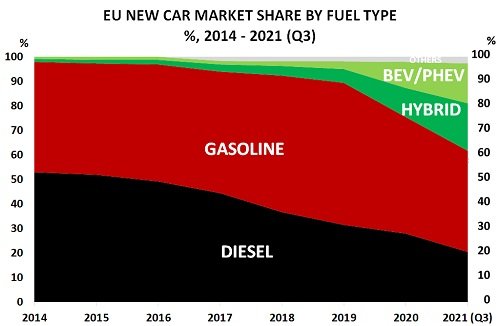 The European auto industry is going through a similar transformation, as the chart shows:

Unsurprisingly, oil companies are seeing the writing on the wall for their refineries. Shell are now closing crude oil refining at the Rhineland Refinery in Germany, and converting it into:

Some had argued that demand for plastics would support refinery operations, but clearly that isn’t happening. In reality, the output of the main feedstock, naphtha, is just too small to keep a refinery running as diesel and gasoline sales disappear.

Then there is the global momentum building amongst brand owners and legislators to stop using virgin plastics. As the new Global Commitments report from the Ellen MacArthur Foundation confirms, the main brand owners are expecting a 19% decline in the use of virgin plastics in packaging by 2025.

Their main focus today is on recycled feedstock, due to consumer demand. Volumes are now growing by over 20%/year, and it was 8.2% of all plastic packaging last year:

Logic therefore suggests that companies need to focus on moving into the market for recycled plastic with all possible speed.

Just as gasoline/diesel cars are disappearing from the roads, so virgin plastic is set to disappear from packaging markets.  Many current plants are set to become stranded assets. Not only is the necessary feedstock disappearing, but customers are voting with their feet away from the product.

This will mean new business models, based on recycling waste plastic with local partners in major cities and towns.  As the auto industry has recognised, change is coming at an accelerated pace. In turn, this creates a ‘once-in-a-lifetime’ opportunity to develop major new revenue and profit streams that will provide growth for decades to come.