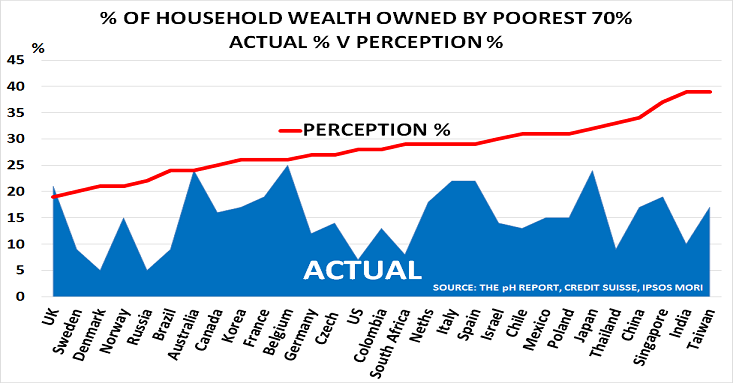 “Consensus wisdom” is a handy way of keeping up with events.  Nobody likes to be the person who says “I don’t know” when the boss asks a question about something important.  But unfortunately, “consensus wisdom” is often wrong, as Ipsos MORI confirm in their new ’Perils of Perception‘ survey,  As the authors note:

“It highlights how wrong the public across 40 countries are about key global issues and features of the population in their country.”

The chart above highlights one of the key results, which has major implications for companies and investors:

  It shows the actual percentage of wealth owned by the poorest 70% of the population in each country
  It also shows people’s perception of the percentage owned by this poorest 70%
  Only 3 countries have an accurate perception – the UK, Australia and Belgium
  India is the most inaccurate, with a 29 point gap between perception and actual
  Other major countries are nearly as bad – the US has a 21 point gap, Russia and China have a 17 point gap, Brazil and Germany have a 15 point gap

As Ipsos MORI note, the problem is that middle class people usually think:

“The rest of the population is more like them, than they really are….On average, just 15% of total wealth is owned by the bottom 70% across these countries – but the average guess is almost twice that at 29%. (My emphasis)

The Ipsos data helps to explain why companies and investors are often wildly over-optimistic when planning new investments.  This has become a major problem in the Emerging Markets (EMs), where many senior executives have assumed after visiting the chosen country that vast numbers of people are becoming “middle class”:

 They stay in good hotels, company-chosen for safety and service, with other guests from similar backgrounds
 Their local colleagues and partners are usually middle class and suffer from the over-optimism recorded by the polls
 They rarely visit areas where most people live, as colleagues and the hotel often tell them these are “too dangerous”

The past few years of high profile stimulus policies has only added to the confusion.

Most visitors were immediately impressed to find an expensive new airport when they landed.  They were similarly upbeat to find shopping malls filled with western luxury goods.  Naturally, they assumed this meant the economy was booming. And, of course, the major international banks were happy to supply them with imaginative and glossy reports on the country’s potential, in the hope of winning lucrative project work.

In reality, however, they have been fooled.  This appearance of “middle class living” was financed by debt, not wages:

The end result, unfortunately, is that many companies have effectively been wearing rose-tinted spectacles when making investment decisions.  They now face a very difficult time as these plants all start to come online.

President-elect Donald Trump has made it clear he will impose tariff barriers to force US manufacturers to reshore production back to the US.  In turn, many EMs will no doubt put up trade barriers to protect their own industry.  Supply chains will be hit from two angles at once.  Not only will imports from the EMs reduce, but exports to the EMs will also decline:

  Ford’s decision this week to abandon its planned $1.6bn Mexican investment is a clear sign of what is to come
  They were at least able to cancel. If it had already been built, it would probably now become a “white elephant”.

Unfortunately, this creates a further problem for “consensus wisdom”.  Much of what appeared to be true during the SuperCycle is no longer correct.  As I noted on Monday, economic criteria are no longer the key to future profitability.

The next 12 months are therefore likely to see more change than we have seen in the past 20 years.  Companies and investors that fail to quickly realign their perceptions with reality will risk finding life very difficult indeed.