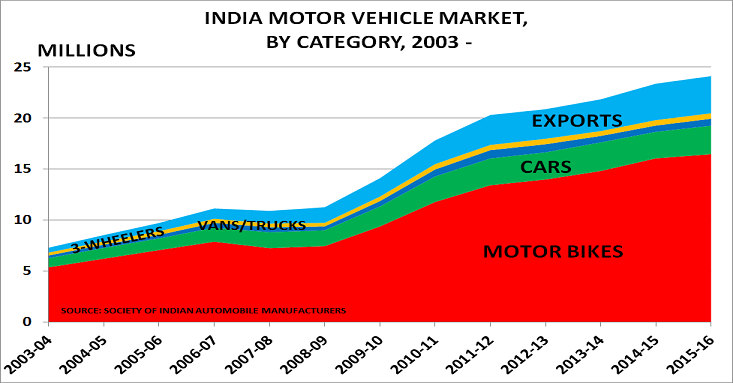 Motorbikes continue to dominate India’s motor vehicle market, as the chart above shows based on new data from the industry association (India’s year runs from April – March):

The chart also highlights how motorbike sales have seen major gains in recent years.  Their volume has risen steadily since 2010-11 and is up 40%, whereas car sales have essentially plateaued –  2015-16 volume was still slightly below the 2013-14 level.

This is a long way from the confident forecasts of just 5 years ago, when one leading consultancy suggested:

This highlights the danger of euphoria and groupthink when forecasting the future.  Even their Conservative case suggested Indian sales would be higher than Germany – but in fact, Germany sold 3.2m cars in calendar year 2015, and the UK 2.6m.  Only French sales at 1.9m were below India – due to their declining from 2.3m in 2011.

And it goes on to argue that:

“India has just 17 passenger cars per 1,000 people compared with 215 in Brazil, 450 in Britain and 540 in Germany.  There is enormous potential for a further increase in both vehicle ownership and gasoline consumption as more and more households are able to afford to drive”

But if this is the case, why have car sales not really grown over the past 5 years?  What is suddenly about to change?  After all, although India is making good progress in fighting poverty, average incomes for this year are still forecast to be just $1500/person.  And if this is achieved, incomes will still have taken 7 years to double since 2009-10.

Smart companies will take little notice of such arm-waving forecasts.  They will already know that the market with the biggest growth potential in India over the next few years is for toilets.  600m Indians still lack access to these – and without toilets, it is hard to see the drivers for India’s auto demand switching from motorbikes to cars in the near future.