What goes up, usually comes down. And house prices have certainly gone up over the past 10 years around the world, as the Bloomberg and Global Property Guide charts confirm. The world has never seen anything like this before. 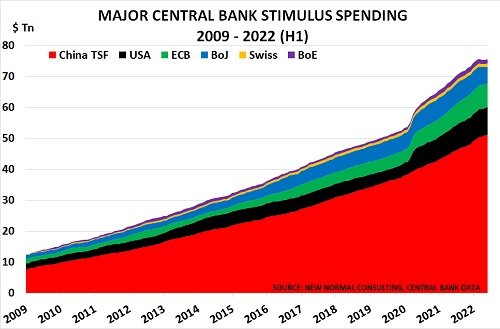 But then the world has never seen $70tn of stimulus from central banks before over the past 10 years, as the second chart confirms.

Now, unfortunately, we seem to have reached the point where all this stimulus comes to a sudden end.

Russia’s invasion of Ukraine has forced policymakers to start unwinding their stimulus policies of the past 20 years:

The past decade saw many homebuyers start to buy into this theory, as the Fed bought $2.7tn of mortgages after 2008 to keep prices moving higher.

They began to believe they would never have to actually repay their mortgage.  Instead, they only focused on the monthly interest payment. And so they felt able to afford higher and higher prices.

Everyone who owned a house felt “richer” and spent the “profit” on new cars, holidays or other “wants”.

In China, people were actually happy to “buy” homes that were never actually going to be finished – the ultimate form of Ponzi scheme.

THE LONDON HOUSING MARKET IS A CASE STUDY 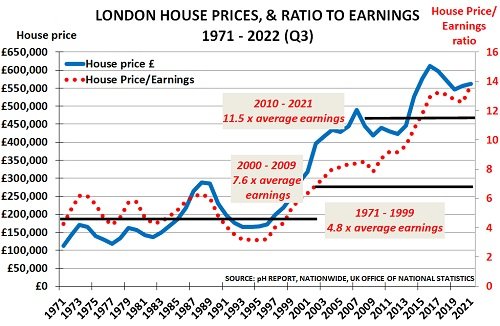 The London housing market from 1971 – 2021 provides a Case Study of what has gone wrong, as the chart shows:

But as The Economist has warned, today’s larger mortgages mean:

‘An interest rate of just 3% today results in mortgages that absorb the same share of income as a rate of 14% did in 1980.

But now, rising inflation has even caused interest rates to break out of their 40-year downtrend. And mortgage rates are rising rapidly in response. As analyst Charlie Bilello notes for the US market:

These rate rises are likely to break global housing markets. As the US National Association of House Builders has warned:

“Buyer traffic is weak in many markets as more consumers remain on the sidelines due to high mortgage rates and home prices that are putting a new home purchase out of financial reach for many households.”

Buyers’ confidence has been key to the rise in house prices over the past decade. But that is now disappearing as central banks are forced to refocus on inflation risks, and interest & mortgage rates start to return to more normal levels.