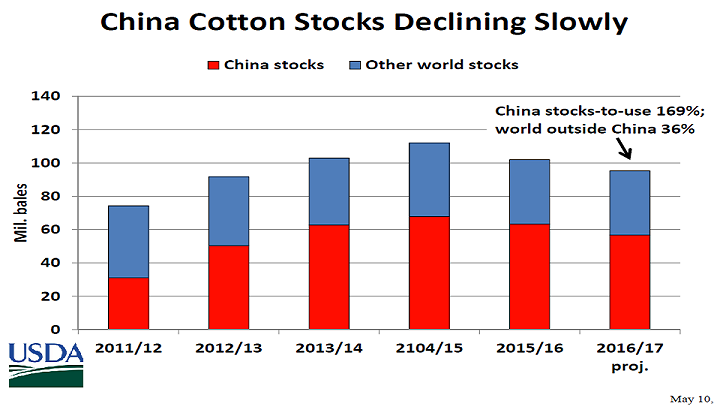 China’s long-promised cotton auctions have begun this week.  Their outcome will tell us a lot about President Xi Jinping’s ability to force through his New Normal changes in the economy.  It will also, of course, have major impact upon the polyester value chain, given the competition between the 2 fibres.

As the slide from the US Dept of Agriculture’s (UDA) new monthly report shows, China’s current stock equals 169% of its annual use, nearly five times higher than the 36% figure in the rest of world. And at the moment (cotton year 2015/16), this means that global stocks are very close to all-time record highs.  There is enough in store to make 3 pairs of jeans for everyone in the world –  following the disastrous impact of China’s stimulus policies post-2008.

The fact that auctions are now being held does suggest that progress in potentially being made, but as I noted last month:

There seems more confidence this time, with the International Cotton Advisory Committee suggesting that:

“Chinese cotton stocks will fall to a five-year low, as the government auctions off its huge reserves”

And a further positive sign is that the limit for daily sales has been raised from 30kt to 50kt, with the government now planning to sell 2 million tonnes in the May to August period, with prices based on international and domestic levels.

China’s cotton stocks have been hanging over world markets for some time.  A successful auction process will almost certainly push prices lower in the short-term, as it comes at a time when USDA is already forecasting a 5% increase in global production for the 2016/17 cotton year, with US output expected to be up 15%.  It notes that:

But there is really no alternative.  The mistake was made, and it now has to be unwound.  Only then can the global cotton market hope to return to being based on the fundamentals of supply and demand rather than stimulus policies.

Polyester producers are already in the eye of the storm, following China’s decision during the stimulus period to build sufficient PTA capacity to supply the needs of the entire world.   Lower cotton prices will obviously increase the pressure.  All they can hope is that oil prices may now weaken again.  One positive is that last month’s speculative commodities bubble on the Dalian futures exchange has indeed collapsed as expected.

Clearing up the mess created by the stimulus programme was never going to be easy.  But we are, where we are.  And the alternative of doing nothing, solves nothing.