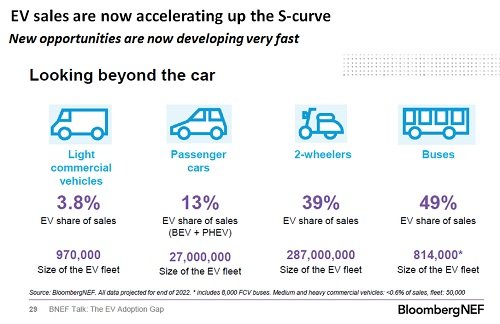 Electric Vehicle (EV) sales accelerated up the S-curve last year as the BloombergNEF chart shows. Van sales began to ramp up and reached 4% of sales. Importantly, 13% of all new car sales were EVs (around 10.6m), and there are now 27m on the road. 2-wheelers were even further ahead with 39% of sales, thanks to India and other poorer countries. And EV bus sales were almost level with gasoline/diesel at 49%.

Paradoxically, Russia’s invasion of Ukraine provided a major boost for sales.  It led the International Energy Agency to abandon its decades-long policy of encouraging oil/gas investment. Instead, it is now focused on the need to boost renewables and accelerate EV adoption, as discussed here soon after the invasion in March:

“Geopolitical, economic and sustainability goals are all pointing in the same direction as the IEA notes:

“Governments need to accelerate the transition to Electric Vehicles and unblock supply chains – shortages of nickel and lithium, for example, need to be resolved via major investment. As does the battery charging infrastructure”

Europe and the USA are now starting to catch up. Importantly, both are now effectively banning Internal Combustion Engine (ICE) sales by 2030-35:

Importantly, auto manufacturers are going with the flow. They can see the future is electric and autonomous, and so are already cutting back on ICE development.

Instead, they are ramping up EV supply and choice, with at least 43 new models to be launched this year. 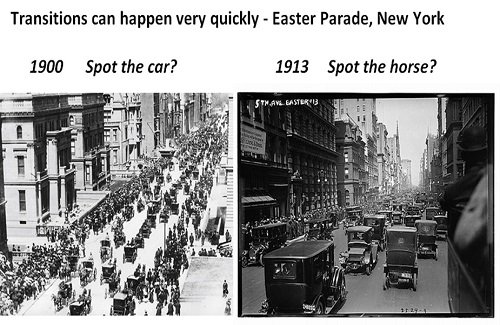 Of course, there are still plenty of nay-sayers.  As we all know, human beings don’t like change.

As they say, it will take time to increase raw material supplies.  But it is already happening in lithium, for example. Others obsess about range issues and the lack of charging infrastructure. All these are fair points today, but they ignore history.

A century or so ago, after all, people were still using horse-drawn transport. And when Mercedes-Benz and Henry Ford came along with their new-fangled autos, the media were full of people claiming that cars would never take off.

A similarly rapid EV ramp-up is now almost inevitable in the next few years:

In turn, of course, Winners & Losers will emerge as the mobility market transforms from ICEs to EVs, just as happened when ICEs replaced horses. And further change is inevitable as Autonomous Vehicles start to come to market in the next few years.

The whole value chain will be transformed. Many garages will likely either become charging/battery-swapping venues or disappear, as gasoline demand declines along with the need for servicing. The insurance industry and many others will also see major change. Chemicals, too, will need to rapidly convert to use recycled feedstocks as refineries close.

The ‘digitalization of everything’ has transformed the global economy over the past 30 years. The rise of the internet is just one example. Now electrification is set to have a  similar impact, starting with the world’s largest manufacturing industry. Fasten your seatbelts for the ride!