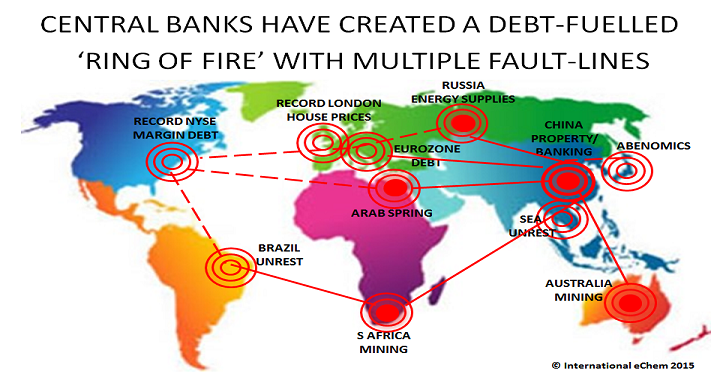 Next week, I will publish my annual Budget Outlook, covering the 2017-2019 period. The aim, as always, is to challenge conventional wisdom when this seems to be heading in the wrong direction:

Before publishing the new Outlook each year, I always like to review my previous forecast. Past performance may not be a perfect guide to the future, but it is the best we have.

The map above highlighted the core argument for the Outlook, that stimulus had effectively created fault-lines throughout the global economy.  I suggested that:

“Those connected to emerging economies which have lost Chinese markets, have already started to open (thick lines).  The developed economies will follow as the impact of China’s slowdown spreads (dotted lines).  It will be a bumpy ride for the next few years.  And companies should plan for the bumps in the road to be particularly large next year.”

It has in fact been an even bumpier ride that I had forecast, with the rise of the Populists helping to make rational discussion ever more difficult:

“This is the Great Unwinding now underway of the policymaker stimulus that pushed oil and other prices higher after 2008 – and led to China’s property and other bubbles now being unwound by President Xi:

  These bubbles have given companies a completely false view of underlying demand
  This $35tn of stimulus has made it appear that poor people in emerging countries (earning $2/day – $20/day) had become middle class by Western standards
  It disguised the fact that 1bn people in the world are moving out of the high-earning, high-spending Wealth Creator generation (those aged 25 – 54), into the low-earning, low-spending New Old 55+ generation

“As a result, many industries have vastly over-expanded their capacity. They always do this at market peaks, as executives – cheered on by investors – rush to build new plants on the basis that demand growth will continue forever. The post-2008 market cycle has been even worse than normal for 2 key reasons:

  Most companies knew very little about China before 2008, and were easily persuaded that it would continue to see double-digit growth. They were also fooled by consensus thinking into believing that 3bn people in the emerging economies were becoming middle class
  Companies also put on their rose-tinted glasses when it came to assessing the impact of ageing populations on demand. They wanted to believe that “this time would be different”, and 65-year-olds would suddenly start spending as if they were 20 years younger

“Now the Great Unwinding of these policies is underway, and all this excess capacity will force companies to compete fiercely on price and battle for market share. Even worse is the risk that, unlike in the past, demand may never catch up with all this new supply. It will take decades for the supposed ‘middle class’ in emerging economies to actually become middle class – if all goes well. And it would take 25 years for new babies to grow up and become Wealth Creators, even if women suddenly started tomorrow to reverse the decline in fertility rates and have more babies….

“It seems very unlikely that policymakers outside China will suddenly realise the error of their ways, and abandon stimulus. Far more likely, as the European Central Bank suggested last week, that they will do more and more stimulus to try and hide the failure of their policies. So markets will be pushed higher by the lure of unlimited amounts of free money from the central banks, and then brought low by the return of reality in terms of slowing demand and increasing debt levels.”

All in all, it seems to have been a reasonable forecast of what has happened.

The Brexit vote in June has clearly convinced a large number of people that the world had become a much more uncertain place, than they had previously imagined.  Next week, I will look ahead to what may happen in the 2017 – 2019 period.