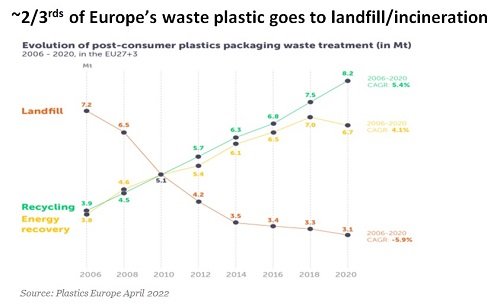 There is no “business as usual” option for Europe’s plastics producers. Feedstock prices are going through the roof as a result of Russia’s invasion and OPEC’s cutbacks. Brand owners are stepping up their demand for recycled plastic packaging. And the increasingly rapid move to Electric Vehicles means that at least 1/3rd of Europe’s refineries will be shutting over the next few years.

Importantly, the industry recognises the scale of the challenge and is accelerating its response to meet it.  As a new report from Plastics Europe notes:

“Although 2020 data show positive developments, the report also signals that the pace of progress still needs to accelerate to reach medium and long-term circularity objectives. Indeed, the analysis observes that achieving the targets of the PPWD* and the CPA* would require doubling the current recycling capacities in Europe.”

The feedstock position represents a major challenge on its own. As ICIS data confirms, Europe’s standalone High Density Polyethylene margins have collapsed over the past year from $800/t in May 2021 to $300/t today.

Demand is slowing as Europe moves into recession and is unlikely to recover soon. As the Governor of the Bank of England warned last week:

But recession and high energy prices are not the only challenges facing the industry.  The Circular Plastics Alliance aims to boost the EU market for recycled plastic to 10 Mt by 2025.

And the industry is already committed to a 30% target for recycled plastics packaging by 2030. Progress will not be easy, as Dr Markus Steilemann, President of Plastics Europe, notes:

“To speed up our industry’s journey to fully embrace the circular economy, we need a comprehensive toolkit. Enhanced recycling requires a boost in the collection and sorting of used plastics. Before they become a product, plastics must be best designed for recycling, while their production needs low carbon feedstocks. This is how we can achieve deep systems change with knock-on effects across our value chains.”

But as the chart confirms, 2/3rds of Europe’s waste plastic currently goes to landfill and incineration. There will never be enough waste plastic to recycle if this is allowed to continue. 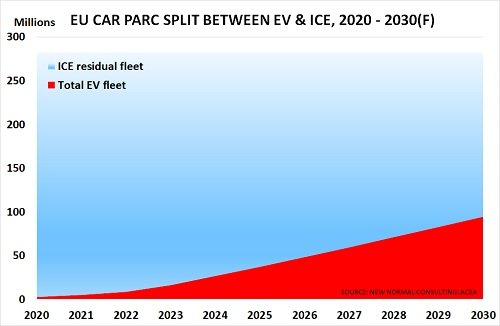 And then there is the increasing impact of the major changes underway in Europe’s transport markets.  They are rapidly moving away from ICEs (diesel/gasoline) to Electric Vehicles (EVs). The chart (based on ACEA data) presents a conservative model of the likely evolution of Europe’s car fleet.

EU governments are already planning to ban ICE sales by 2030-35. And as I noted in March, the International Energy Agency has called for governments to accelerate this move, and plastics recycling, to reduce Russia’s income from sales of oil/gas.

Europe’s plastic industry is at a critical turning point. Profitability is falling as the recession bites. But it cannot just cut back and hunker down. Instead, it has to take a lead in building major new recycling capacity, as current markets and feedstocks start to disappear.