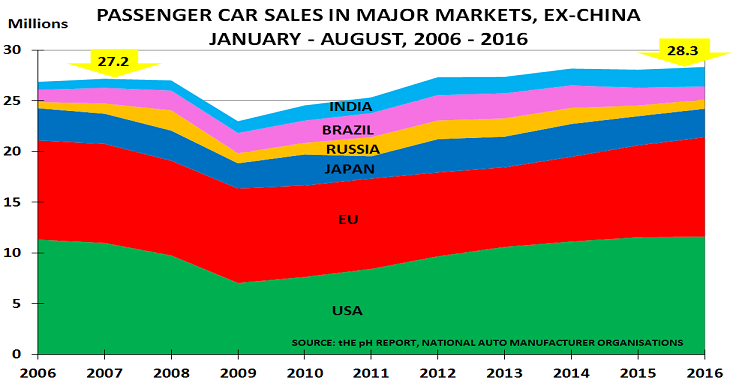 The global auto market is currently dominated by China, where sales have more than trebled over the past 10 years. But the other 6 major markets have not always done so well.  Their total sales are up just 4.3% since they peaked before the Crisis began in 2007.

As the chart, showing January – August sales since 2006 confirms:

This highlights the relatively weak impact of the various stimulus programmes in creating sustainable sales growth over time.  Yet governments have spent billions since 2008 on “cash for clunkers” and other incentives.  The problem is that they feel dependent on the auto industry for jobs, and so they are most reluctant to let the market operate in balancing supply and demand.

The EU is a good example of the distortions this has produced.  A new scandal is just emerging, after the VW diesel problems, based on the common dealer practice of self-registering new car sales. As Bloomberg report:

“Manufacturers and dealers have been inflating car sales for years via a trick known as “self-registration.” The carmaker sells a vehicle to a dealer and books the revenue in its accounts. But, absent a customer, the dealer then effectively sells the car to itself. The vehicle often sits on the lot for a while — maybe it’s used as a test drive or loaner vehicle – and is later resold as “nearly new” at a steep discount to the list price. The carmaker can boast of higher sales volumes while avoiding the brand damage from steep discounts on new vehicles. Astonishingly, self-registrations are thought to account for more than 30% of new car “sales” in Germany.”

As the chart shows, Germany is not the only market where the practice is common.  15% of all new car “sales” in France are self-registrations, as are 10% in Italy and the UK.  It is no surprise that these are also countries where auto manufacture is seen as a key part of the economy.

Essentially this is Europe’s way of keeping car production at higher levels than justified by actual demand.  In the USA, the same result has been achieved by extending loan terms to an average of almost 6 years, and allowing sub-prime loans to become 1/3rd of all car loans.  But as one leading consultancy warned yesterday:

“The problem the industry has created across Europe is that dealers, supported by manufacturers, have been using this as a way to get ultra-low mileage, very young cars at a transaction price which is more competitive than a brand new vehicle.”

Automakers know they are playing a dangerous game, but feel trapped by Wall Street pressures to show ever-higher sales each month – no matter whether these sales levels are sustainable in the longer-term  No wonder many of them are trying to change their business models towards “mobility” as fast as possible.