China is now developing a used car market for the first time in its history.  This means the end of global auto sales growth, as I describe in my latest post for the Financial Times, published on the BeyondBrics blog 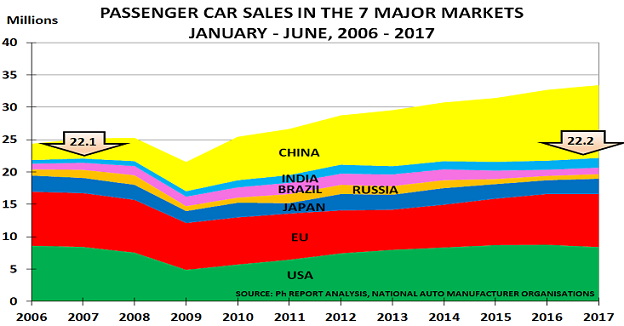 China’s car market has been key to the recovery in global auto sales growth since 2009, as the chart shows.

Its passenger car sales in the first half of each year have risen threefold between 2007 and 2017, from 3.1m to 11.3m today, while sales in the other top six markets have only just managed to recover to 2007 levels.

But now major change is coming to China’s market from two directions.

The first sign of change is the fact that H1 sales rose just 2.7% this year. This is the lowest increase since our records began in 2005 (when sales were just 1.8m), and compares with an 11% rise last year.

Official forecasts for full-year growth have also been revised down, to between 1% and 4%, by the manufacturers’ association. A further sign of the slowdown is the rise in price discounting, with Ford China suggesting prices were down 4% on average in the first half.

The second change may be even more important from a longer-term perspective. It seems likely that China’s used car market is poised for major growth. As the second chart shows, only 10m used cars were sold last year, versus 24m new cars. 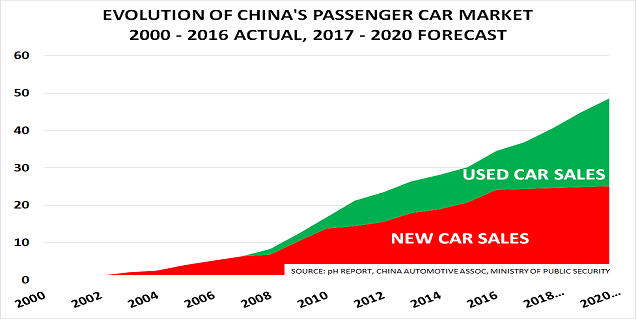 The background to this unusual situation is that China’s new car sales were relatively small until the government’s stimulus programme began in 2009. Their quality was also poor, as most cars were produced domestically and only lasted an average of three years. As a result:

 The auto market only really began to take off in 2009 under the influence of the stimulus packages, when annual new car sales jumped 53% from 6.7m to 10.3m. About 200m Chinese were able to drive a car in that year, and the stimulus programme suddenly provided them with the cash to buy one
 Used car sales were much slower to develop, as it took time for the introduction of western manufacturing techniques to gradually extend the average life of a car from 3 years in 2012 to 4.5 years today. But now the pace of change is rising, and it is expected to reach 10 years by 2020

The chart also shows our forecasts for the used car market out to 2020, when we expect used car sales to equal new car sales at 23.5m. This would still only represent a 1x ratio, but the forecast is in line with a new report from Guangzhou-based analysts Piston, who told WardsAuto:

“The used-car market in China is expected to have an explosion in the coming decade, because the ratio of used to new is [the opposite of that in] the US.”

One sign of the change under way was seen last month, when Guazi.com, China’s largest used car trading site, was able to raise a further $400m from investors to expand its service.

Guazi, like BMW and others, have seen that the used car market offers very favourable prospects for growth prospect — as long as attention is paid to boosting buyer confidence by providing sensible warranties and service packages.

Local governments have also played their part under pressure from central government. The state-owned China Daily reports that 135 local authorities have now removed barriers that prevented used cars from one province being sold in another. The effect of these changes is having an effect, with used car sales in January-May jumping 21% versus 2016.

Such strong growth rates, and the slowdown in new car sales, suggest China’s auto market may have reached a tipping point.

All good things come to an end eventually, and it seems prudent to assume that China will no longer be the main support for global auto sales. We expect China’s new car sales to plateau because of the combined impact of the end of stimulus (as discussed here in June), and the rise of used car sales, as these will inevitably cannibalise their volumes to some extent.

Clearly this is not good news for those western manufacturers that have made China the focus of their growth plans in recent years. And there may be worse news in store, given the government’s determination to combat urban pollution by promoting sales of electric vehicles and car-sharing.

Yet it will be good news for those prepared to develop new, more service-related business models. Used-car sales themselves can be highly profitable, while servicing and spare parts supply are likely to become equally attractive opportunities.