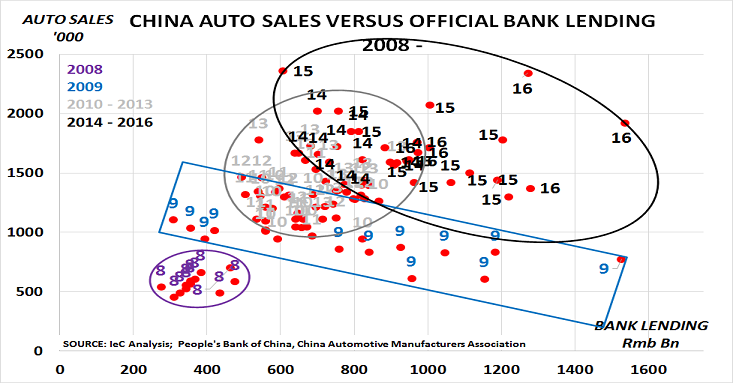 “What a difference a day makes“.

Dinah Washington’s famous song could well be applied, with a longer timescale, to developments in China’s economy.

The shape of the above chart has changed completely since it was last featured here in January 2015, as volatility has increased in China’s economy.  It shows the relationship between bank lending and auto sales on a monthly basis, segmented by years, and includes latest data for January – July 2016.

The rationale for the chart is that most Chinese auto sales are based on borrowed money, due to the low level of average incomes.  But borrowing itself, based on incomes, wouldn’t have enabled auto sales to treble since 2008.  It was the rampant property market speculation unleashed by former President Hu and Premier Wen, with their dramatic increase in lending, that made the surge in sales possible.

One key effect of this speculation was to further divide the country into two halves.  Average incomes in the urban areas are already 3x those of rural areas – and, of course, rural areas offer little scope for property speculation:

The 2014-2016 data thus highlights the major political battle that has taken place within the Chinese leadership over the past 2.5 years.  Stimulus has been the core policy of the Populist faction led by Premier Li Keqiang, who has been opposed by the Princelings under President Xi Jinping, as I discussed a year ago.

The battle has been intense.  Li has marshaled support for further lending from provinces based on Old Economy industries such as steel, as in Q1, when the economy seemed to slow.  Xi has then pushed back firmly on the basis that structural economic reform based on New Normal industries must be the key priority. 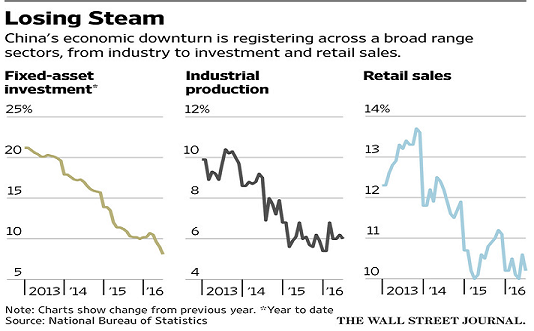 Overall, Xi has been winning since 2014, as the charts above from the Wall Street Journal confirm, although there has been major volatility along the way as Li and the Populists have managed to introduce new stimulus.  As the Journal notes:

“Sheng Laiyun, a spokesman for the National Bureau of Statistics, acknowledged at a briefing Friday that many private businesses were reluctant to expand against a backdrop of cooling growth.  “Economic performance in July was indeed slower as the domestic and global economies are still undergoing deep adjustment.”

The key issue is that Xi comes up for reappointment next year and it would therefore make no sense for him to hold back on reform now.  He needs to be able to claim that he has tackled the worst of the problems that he inherited, and then point to the prospect of better times ahead, as his New Normal reforms – such as the One Belt, One Road initiative and the Shenzhen/Shanghai – Hong Kong Stock Connect financial linkages – start to produce results.

The rest of this year is therefore likely to be particularly tough, as Xi “takes the pain” of reform.  Companies and investors who have been expecting further stimulus may therefore find it prudent to develop contingency plans in case such stimulus does not appear.