Skip to content
Home / Chart of the Year – the surge in Electric Vehicle sales will disrupt auto, oil and petrochemical markets 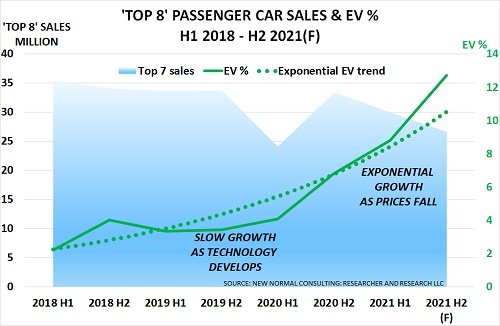 Last year’s chart was Nobel Prizewinner Prof Robert Shiller’s CAPE Index. 2019’s Chart of the Decade spectacularly forecast March 2000’s crash. 2018 focused on China’s shadow banking, then close to its peak. In 2017 it was Bitcoin, in 2016 it was the near-doubling in US 10-year interest rates, and 2015 was the oil price fall.

The chart confirms that EV sales in the Top 8 markets are starting to accelerate up the S-curve into their exponential growth phase – when supportive factors reinforce each other:

Another key issue is that EV prices have generally not increased very much over the past year, as automakers focused on building EV market share for the future. They have, however, increased legacy Internal Combustion Engine (ICE) prices by >20% – leading to a major rise in average prices.

The price differential has thus fallen by 1/3rd, and UBS expect EV and ICE prices to equalise by 2024 as EV costs continue to fall. 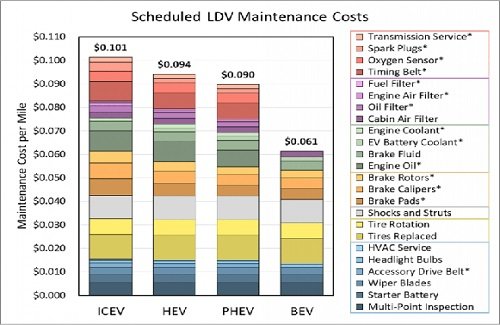 Toyota has also now entered the race, planning to spend $35bn on EV launches by 2030.  This makes it even less likely that Tesla will achieve the monopoly position still expected by many investors.

The same is now likely to happen with EVs, as consumers abandon ICEs in the same way as they abandoned cellphones. And it is also good news for Net Zero targets, as transport is around 60% of total oil demand.

Oil companies can see the writing on the wall. Refineries will soon be stranded assets as demand for gasoline and diesel collapses.  And investors are focused on accelerating the change, as we saw with Engine No 1’s victory for its director nominees at ExxonMobil.

The implications of the rise in EV sales go well beyond the auto and oil markets. Petrochemicals is likely to be next in line for disruption as its naphtha feedstock from refineries disappears. This is why the surge in EV sales up the S-curve of adoption has to be my Chart of the Year.