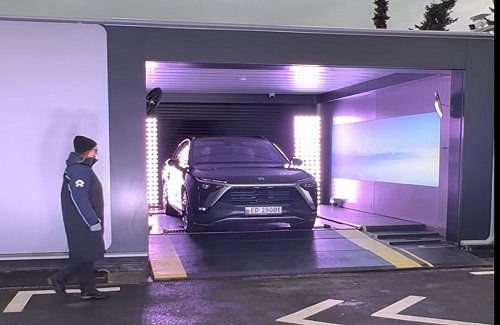 Electric Vehicle (EV) adoption is racing up the S-curve. The global market grew 105% last month, as more and more drivers began to appreciate their lower costs, easier driving and less pollution. And now Chinese company, Nio, is introducing its battery swapping model into Norway – which has the world’s highest adoption rate for EVs.

Almost everyone who has driven an EV becomes a convert, and sales are starting to soar:

But one big worry for many drivers is range anxiety. “Will I be able to get home, if I suddenly have to drive to visit someone in another city?”

The issue is that installing battery chargers everywhere is expensive. And it simply doesn’t work for many neighborhoods. Instead, it makes much more sense to use the existing service station network. Unsurprisingly, China (as the largest EV market) has taken a lead in this area as its AutoManufacturers Association reports:

“The first eleven cities to be included in the pilot are Beijing, Nanjing, Wuhan, Sanya, Chongqing, Changchun, Hefei, Jinan, Yibin, Tangshan and Baotou, with the latter three focusing on truck applications. The pilot project aims to build more than 1k battery swap stations and put more than 100k additional battery swap-compatible e-vehicles on the roads.

“The battery swap network is expected to help save more than 700kt tonnes of fuel and more than 2Mt of CO2 per year.“

And energy giant BP is already moving ahead, forming a joint venture with Chinese company Aulton, who expect:

“To complete the construction of 10k swapping stations that could serve more than 10 million EVs by 2025.”

It aims to swap the old battery for a fresh fully-charged one in the same time as it takes today to fill up with gasoline or diesel – “one minute or less”, according to BP’s Richard Bartlett.

And now Chinese company, Nio, has launched the first model in Norway, as the video shows. 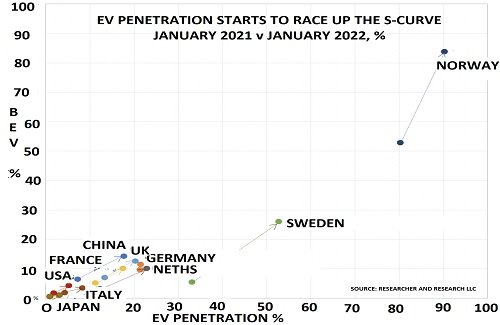 Why Norway, you might ask? The answer is in the chart from Researcher and Research.  It shows that Norway has the highest Battery EV (BEV) penetration in the world:

“In January this year, the proportion of its BEV sales increased from 65.7% in the same period last year to 92.5%.”

The key issue is that EV sales are increasing on an S-curve – just as smartphones did from 2009-17, as I noted last week:

The other key issue is that EVs are just a stepping stone on the way to Autonomous Vehicles (AVs):

So governments need to think ahead – as China is doing. Lots of charging points will be needed in the next 10-15 years, as the EV market develops ahead of the AV market. But governments also need to look beyond that, to encourage the development of battery-swapping. And automakers need to support this move, as I’ll discuss next week.